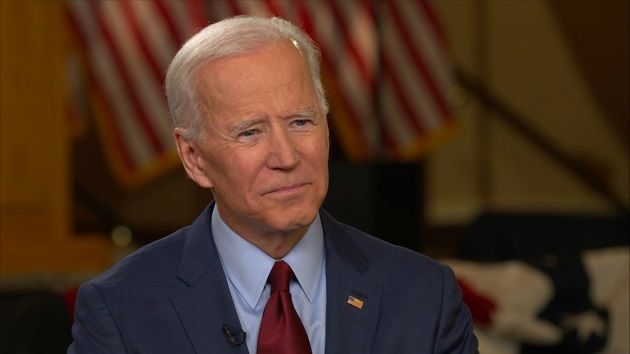 (MANCHESTER, N.H.) — Former Vice President Joe Biden defended his son Monday, after President Donald Trump’s personal lawyer Rudy Giuliani canceled a planned trip to Ukraine, to push for more information about the Biden family as part of an effort to bring attention to the work Hunter Biden did for a Ukrainian energy company at the same time his father was focusing on the country as part of his Obama White House portfolio.”I can’t remember any lawyer representing the president, conferring with the president, deciding to go overseas — where a government relies on U.S. largesse — to try and get at something everyone knows never happened,” Joe Biden told ABC News affiliate WMUR-TV. “It’s just inappropriate to send your lawyer to a foreign government to try to get them to do something that has no merit other than to embarrass — to try to embarrass.”Giuliani has pushed for an investigation into Burisma Holdings, a Ukrainian energy company that Hunter Biden served as a board member while Joe Biden was in office.”All the reporting has indicated that there is not a single, solitary thing that was inappropriate about my son, that he never once talked to me, never once talked to anybody in the administration,” Joe Biden said to WMUR.While serving as vice president, Biden helped oust former Ukrainian prosecutor general Viktor Shokin in 2016. Some reports suggest Shokin was investing in Burisma Holdings at the time, but there are some questions about the timing.The Biden campaign previously pushed back on speculation of any wrong doing. Kate Bedingfield, Biden’s communications director, said the push to remove Shokin was undertaken, “without any regard for how it would or would not impact any business interests of his son, a private citizen.” Bedingfield first told this to the New York Times and later confirmed it to ABC News.A Trump campaign official tried to distance the campaign from Giuliani’s planned trip, telling ABC News that, “Rudy Giuliani is a private citizen. The campaign is not affiliated with these probes, and questions about them should be directed to him.” Copyright © 2019, ABC Radio. All rights reserved.