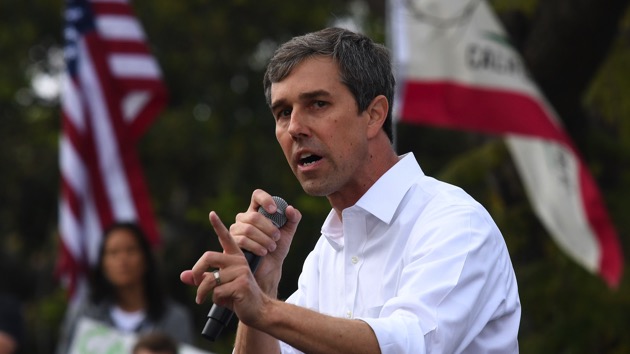 MARK RALSTON/AFP/Getty Images
Posted on May 14, 2019 by ABC News

(NEW YORK) —  Former Texas congressman Beto O’Rourke during an appearance on ABC’s The View spoke about the position of white male privilege, acknowledging that his background has helped him advance in career and vowing, if elected president, to help eradicate the systemic inequalities that separate the haves from the have nots.”There have been things I have been privileged to do in my life that others cannot,” he said and then pointed out gender and racial disparities in pay and the disproportionately high incarceration rates for minorities.His campaign, O’Rourke said, is about “bringing people together and making sure Democracy works.”After being asked if his Vanity Fair cover was a mistake, O’Rourke said, “Yeah, I think it reinforces that perception of privilege and that headline that said I was, ‘I was born to be in this’ in the article I was attempting to say that I felt that my calling is a public service. No one’s born to be President of the United States of America.”O’Rourke told reporters in New Hampshire over the weekend that he’s looking forward to his appearance on The View, as part of a succession of television interviews that, O’Rourke said, would “allow me to introduce myself to more of the country and also answer questions about why I’m running and how I propose to achieve the vision I’ve laid out.”O’Rourke entered the crowded 2020 field and immediately attempted to distinguish his campaign with a carefully crafted roll-out that sought to highlight his youthful energy and free-spirited optimism. On The View on Tuesday, he acknowledged that carefully honed roll-out had some missteps.His campaign had aimed for an air of impromptu joie de vivre focusing on small house party gatherings, town halls, jam-packed coffee houses, hitting countless counties on cross-country road trips – all on a jam-packed scheduleHowever, since then, the Democratic field has swelled – and as such, some of the buzz surrounding the former Texas congressman has ebbed. He is now competing with a growing surge of White House hopefuls, and has sagged in the polls. On The View, O’Rourke vowed to compete with campaign heavyweights like Former Vice President Joe Biden by focusing a grassroots campaign on direct voter engagement in key states like Iowa.On whether or not a woman would join his ticket as a vice presidential nominee he said, “It’s hard to imagine a scenario where I wouldn’t be fortunate enough to also be with one of these extraordinary women in our country.”The former El Paso Texas congressman first rose to the fore in the fervently watched close — though ultimately unsuccessful – challenge to Republican incumbent Sen. Ted Cruz.O’Rourke’s off-the-cuff candor put him on the map and made his mid-March presidential campaign launch much-anticipated. He’s campaigned from the bed of a pickup truck and leaped atop the bars of diners, running on the same kind of energy his long-shot bid to unseat Cruz had, focusing on “showing up everywhere,” and speaking to voters disillusioned with the political process.He’s faced some criticism for perceived thinness of concrete policy offers– and skepticism whether he’d be able to fill them out.His campaign has recently laid low, entering an intentional “quiet period” to flesh out, if not refurbish, their approach.Quiet time’s about to end.O’Rourke recently rolled out an expansive, $5 trillion plan to combat climate change – and set to announce further plans on top issues as his campaign unfolds.Also coming on board, former top Obama aide Jennifer O’Malley Dillon – now O’Rourke’s campaign manager; he’s also just hired Jeff Berman – a consummate veteran of presidential campaigns overseeing delegate operations, an area where artful strategy and understanding obscure gambit can be crucial to securing a nomination.Now fresh off a weekend stumping in New Hampshire, O’Rourke plans to shake things up this week on the national stage.Since launching his campaign, a senior aide to O’Rourke described how this will be an opportunity for O’Rourke to do just that, telling ABC how after being on the road nonstop since launching, “he will be sharing what he’s learned, what he’s heard, the goals and vision voters have told him about, and his plan to achieve them by bringing the country together to deliver for everyone, everywhere, every single day.”Copyright © 2019, ABC Radio. All rights reserved.