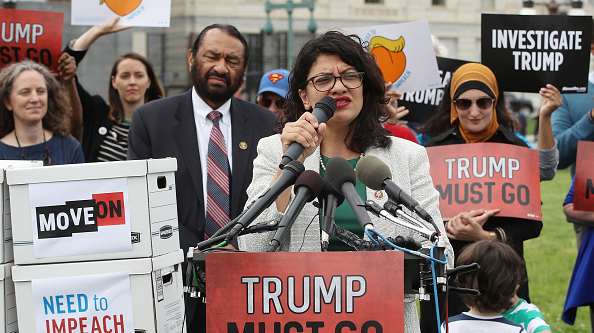 (WASHINGTON) — President Donald Trump on Monday joined top House Republicans in attacking Rep. Rashida Tlaib, D-Mich., for her recent comments on the Holocaust and Israel while several House Democrats are coming to her defense.”Democrat Rep. Tlaib is being slammed for her horrible and highly insensitive statement on the Holocaust,” Trump said in a tweet. “She obviously has tremendous hatred of Israel and the Jewish people. Can you imagine what would happen if I ever said what she said, and says?” In an interview Saturday on Yahoo’s podcast “Skullduggery,” Tlaib, one of the first two Muslim women in Congress, spoke about her support for a one-state solution to the Israeli-Palestinian conflict.”There’s, you know, there’s a kind of a calming feeling, I always tell folks, when I think of the Holocaust and the tragedy of the Holocaust, and the fact that it was my ancestors — Palestinians — who lost their land and some lost their lives, their livelihood, their human dignity, their existence, in many ways, had been wiped out,” Tlaib said. “I mean, just all of it was in the name of trying to create a safe haven for Jews, post the Holocaust, post the tragedy and the horrific persecution of Jews across the world at that time.” On Sunday, two top House Republicans, House Minority Whip Steve Scalise, R-La., and Rep. Liz Cheney R-Wyo., condemned Tlaib’s comments as “disgusting” and “vile anti-Semitism.””There is no justification for the twisted and disgusting comments made by Rashida Tlaib just days after the annual Day of Holocaust Remembrance,” Scalise said in a statement. “More than six million Jews were murdered during the Holocaust; there is nothing ‘calming’ about that fact.”Tlaib fought back on Monday saying Trump and the top-ranking GOP lawmakers Monday had deliberately misconstrued her words to “spread falsehoods rooted in hate.”“Trump has doubled down on his party’s use of the Holocaust to score political points. Instead of recognizing that the accusations against me are false and that my words have been blatantly misconstrued, Trump has once again used his platform to incite hate and violence based on lies,” Tlaib said in a statement .She added, “Anti-Semitism has no place in our society and any effort to try to sow hate and divisiveness into our political discourse must be stopped immediately in its tracks. Hate and violence will not move this country forward. Only inclusive leadership and confronting the truth about the growing white nationalist movement in our country will move us forward. Unfortunately, we are not seeing it from President Trump nor his Republican Party.”Cheney called on House Speaker Nancy Pelosi, D-Calif., and Majority Leader Steny Hoyer, D-Md., to “take take action” against the freshman Democrat for her remarks.Hoyer tweeted Monday in defense of Tlaib and said that the congressional Republicans “owe her an apology.””If you read Rep. @RashidaTlaib’s comments, it is clear that President Trump and Congressional Republicans are taking them out of context. They must stop, and they owe her an apology,” Hoyer tweeted. Reps. Mark Pocan, D-Wis., and Ilhan Omar, D-Minn., also have vocalized their support for Tlaib. Omar, who was elected alongside Tlaib as the first women Muslim members of Congress in U.S. history, faced controversy earlier in the year from comments she made that some deemed anti-Semitic.Omar responded directly to Trump’s tweet and said that his attack of Tlaib “is another transparent attempt to sow division.”This is not the first time the freshman Democrat has come under fire her comments on the Israeli-Palestinian conflict. In the past, Tlaib has criticized Israel and the U.S. approach to the issue, and called for one state for both Israelis and Palestinians.