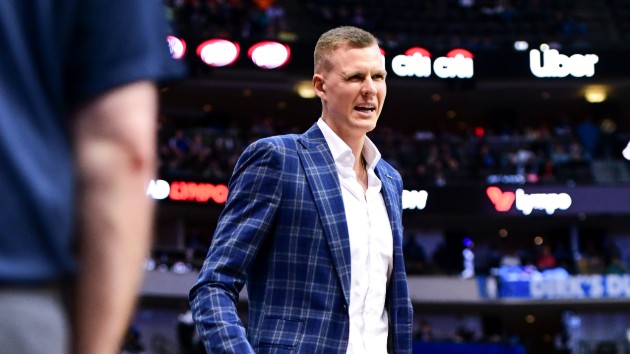 (DALLAS) — The Dallas Mavericks say Kristaps Porzingis was involved in an altercation at a nightclub in his native Latvia.After video showed the 7-foot-3 forward with a bloody forehead, the Mavericks said Sunday: “It is our understanding that Kristaps was jumped and assaulted outside of a club,” without providing further details.Video of the aftermath of the incident obtained by TMZ showed an agitated Porzingis in a torn shirt, pushing someone out of the way and approaching a group of men before several people stopped him and urged him to calm down.The 23-year-old Porzingis was acquired by Dallas in a blockbuster deal with the New York Knicks before the trading deadline but hasn’t played for the club. He missed the 2018-19 season after tearing a ligament in his left knee in what turned out to be his final game for the Knicks in February 2018.Porzingis will be a restricted free agent July 1, and the Mavericks have said they intend to sign him to a long-term contract.Copyright © 2019, ABC Radio. All rights reserved.

As nursing homes get vaccine, assisted living centers are left ‘falling through the cracks,’ experts say
‘Game of Thrones’ prequel, ‘Tales of Dunk and Egg’, in the works at HBO
1,900 doses of Moderna vaccine destroyed after cleaner unplugs freezer in Boston
Coronavirus live updates: New cases, deaths in US down week-to-week
Columbus to invest nearly $5M in police bodycams after Andre Hill shooting
Priyanka Chopra Jonas says the racism she suffered in high school forced her to leave America