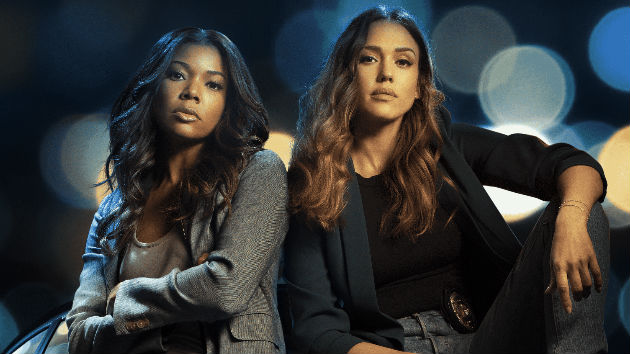 Spectrum Originals/Sony Pictures Television
Posted on May 13, 2019 by ABC News

The show is a Union’s character Syd from the Bad Boys film franchise. Union said the idea came up when she was imagining where some of her movie characters are today.

“In Bring it On, Isis, is she in physical therapy for lower back pain?” Union said on Monday’s Good Morning America.

“‘Did Mike Lowrey and Syd get married?” she said, referencing her character’s relationship with the cop played by Will Smith in Bad Boys 2. “Are they in couples counseling? Did she get fired from the DEA? And we took that idea to [producer] Jerry Bruckheimer and [said] ‘Let’s find out what happened to Syd."”

Union and Alba are executive producers on the show, and Alba credits Union for helping make the set mom-friendly.

“I have a baby and my kids come with me to work at my office at [my company], the Honest Company,” Alba said. “I created an environment where my kids are a part of my life and my workday.”

So when Alba told Union that she probably “wouldn’t want her” in the show because of her parenting duties, Union said, “We’ll make it happen.”

“And so we have a set that’s family friendly and it’s awesome,” Alba said.

Both actresses relish the fact that L.A.’s Finest give them the opportunity to play strong women who are partners and not rivals.

Alba added, “It’s important for people out there to see two women kicking butt, taking names, but doing it together and really partnering up and not being competitive.”

Kamala Harris set to resign from US Senate so she can preside over it
Rep. Lou Correa latest member of Congress to test positive for COVID-19 following siege on Capitol
Woman, 70, filmed allegedly poisoning husband’s coffee with roach killer multiple times
Snow squalls and gusty winds expected in parts of Midwest and Northeast
Nearly a dozen ex-military members among those arrested in connection with Capitol riot
“Oh, it’s fantastic!” Diane Lane loves the fans prompting the release of the ‘Justice League’ “Snyder Cut”