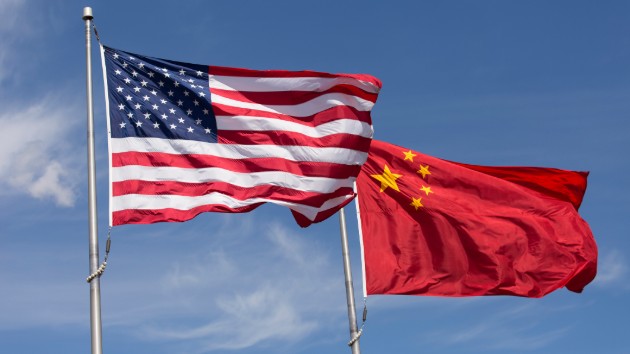 cbarnesphotography/iStock
Posted on May 13, 2019 by ABC News

(WASHINGTON) — President Donald Trump on Monday continued to defend his escalating trade war with China as good economic policy as China announced plans to retaliate against the latest U.S. move to hike the tariff rate on Chinese goods. In a series of early morning tweets, the president continued to falsely claim that the U.S. consumer does not need to pay for the tariffs, even though the reality is that the tariffs will be felt by the U.S. consumer, who are set to pay higher prices for goods that impacted by the tariffs. The president also introduces a new argument that consumers can avoid the tariffs by buying non-Chinese goods. While consumers can choose to buy non-Chinese goods in a number of cases, American shoppers are still impacted in the need to alter their buying habits, and will almost certainly have to pay a higher price for certain goods because of trade dispute.

Their is no reason for the U.S. Consumer to pay the Tariffs, which take effect on China today. This has been proven recently when only 4 points were paid by the U.S., 21 points by China because China subsidizes product to such a large degree. Also, the Tariffs can be…..

….completely avoided if you by from a non-Tariffed Country, or you buy the product inside the USA (the best idea). That’s Zero Tariffs. Many Tariffed companies will be leaving China for Vietnam and other such countries in Asia. That’s why China wants to make a deal so badly!…

..There will be nobody left in China to do business with. Very bad for China, very good for USA! But China has taken so advantage of the U.S. for so many years, that they are way ahead (Our Presidents did not do the job). Therefore, China should not retaliate-will only get worse!

The president also sent a tweet directly addressed to Chinese President Xi, warning that China will be “hurt very badly” if you don’t make a deal. “You had a great deal, almost completed, & you backed out!” Trump tweeted.The U.S. and China had been making progress toward a final trade deal but the tentative agreement all but fell apart last week after the Chinese sought to make revisions to the deal, the White House said.

Chinese negotiators were in Washington on Thursday and Friday for talks. It’s not clear when trade representatives will meet again, but the White House says there’s a good possibility the president could meet with Xi on the sidelines of the G-20 conference next month. The president’s tweets come as he carried through on a threat to raise tariffs on $200 billion worth of Chinese goods from 10 percent to 25 percent, while directing his economic team to explore possibly imposing new tariffs on virtually all other Chinese imported goods not currently subject to U.S. tariffs. China announced plans on Monday to implement tariffs on $60 billion worth of U.S. goods imported to China starting June 1 in direct retaliation to the latest U.S. escalation. “China’s adjustment of tariff-adding measures is a response to US unilateralism and trade protectionism,” China’s State Council Customs Tariff Commission said. The ongoing trade dispute continued to roil markets Monday, with the Dow futures dropping 530 points following the news that China would move to counter U.S. tariffs.Copyright © 2019, ABC Radio. All rights reserved.