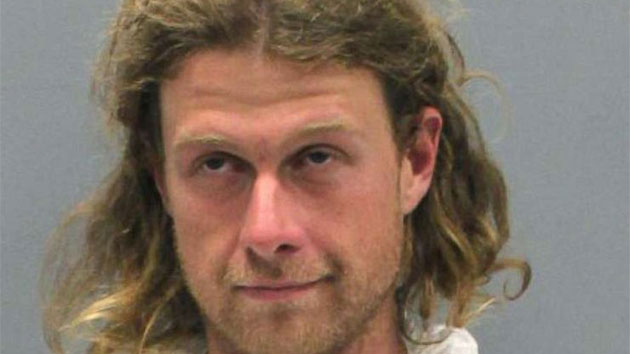 Southwest Regional Jail
Posted on May 13, 2019 by ABC News

(WYTHE COUNTY, Va.)  — Chilling new details have emerged detailing how a Massachusetts man allegedly attacked a pair of hikers with a machete on the Appalachian Trail in Virginia, killing one and severely injuring the other.James L. Jordan, 30, of West Yarmouth, Mass., was arrested early Saturday following the deadly attack in Wythe County, Va., that a federal prosecutor described Sunday as “senseless and brutal.”On Friday, Jordan allegedly approached four hikers near the George Washington and Jefferson National Forest, according to a criminal complaint filed Monday at the U.S. District Court in Abingdon, Virginia. Jordan was known to the hikers, who had previously seen on social media that he allegedly threatened hikers on the Appalachian Trail in Unicoi County, Tennessee in April, according to the probable cause statement.Jordan was acting “disturbed and unstable” and was playing his guitar and singing when he approached the group, the complaint states.Later Friday evening, the group made camp near Wythe County, Virginia, within the George Washington and Jefferson National Forest, when Jordan allegedly began approaching the hikers’ tents, making noises and threatening to kill them, according to the probable cause statement. Through the tents, Jordan allegedly threatened to pour gasoline on them and “burn them to death,” prompting the hikers to pack up and leave.Jordan then allegedly tried to approach the hikers with a knife as they tried to leave the campsite, the complaint states. Two of the hikers chased him away, but Jordan allegedly returned and began stabbing the male victim in the upper body after they began arguing, the complaint states.The female victim ran away after watching the first victim fall to the ground, but Jordan caught up to her as she began to tire, according to the court documents. She then turned to face Jordan, raising her hands “as if to surrender,” and Jordan allegedly stabbed her multiple times.She then fell to the ground and played dead, and Jordan “left to find his dog,” the complaint states.Once Jordan was gone, the victim ran down the trail and ran into two hikers, who assisted her for the next six miles into Smyth County, Virginia, where they called 911, according to the court documents.Authorities at the Wythe County joint dispatch center received the first 911 call around 2:30 a.m. Saturday from two hikers, presumably from the initial group, saying that they were being chased by a man with a machete, the complaint states. Around 3:12 a.m., the female victim called emergency dispatchers in Smyth County, detailing the attack.The male victim was found dead at the scene, and the female victim was taken to the Bristol Regional Medical Center in Tennessee, where she gave a statement to investigators and named Jordan as the man who attacked them, according to the complaint. The victim’s names were not immediately released.Jordan was arrested on the trail around 6:14 a.m. Saturday. He had blood on his clothing when he was taken into custody, according to the complaint. A knife was found near the deceased victim’s body, according to the complaint.A motive for the alleged attack is under investigation by the FBI’s Richmond, Va., division.Jordan was charged with one count of murder within the special maritime territorial jurisdiction of the U.S., and one count of assault with the intent to murder within the special maritime territorial jurisdiction of the U.S., authorities said.The suspect is expected to appear in federal court in Abingdon, Virginia, on Monday, authorities said. It’s unclear if Jordan has retained an attorney.”I commend local law enforcement in Wythe and Smyth Counties for mobilizing successful rescue and tactical operations in this remote region. Thanks to their efforts, the suspect was safely apprehended and the seriously wounded victim received critical medical care,” Thomas T. Cullen, U.S. attorney for the Western District of Virginia, said in a statement.”We will continue to work with our state and local partners to bring the perpetrator of this senseless and brutal attack to justice,” Cullen added.The slaying was the first murder on the Appalachian Trail, a 2,160-mile wilderness path that stretches from Maine to Georgia, since 2011 when hiker Scott Lilly, 30, of South Bend, Indiana, was slain and left in a shallow grave in Amherst County, Virginia. No one has been arrested in the homicide.The most infamous murder on the Appalachian Trail occurred in May 1981 near Pearisburg, Virginia, when the bodies of two hikers, Robert Mountford Jr. and Laura Susan Ramsay, both of Maine, were found in their sleeping bags. Mountford had been shot three times in the face, while Ramsay was stabbed repeatedly with a long nail, authorities said.Randall Lee Smith was arrested in the double homicide. He pleaded guilty to two counts of second-degree murder.The slayings became the subject of the 1984 book “Murder on the Appalachian Trail” by author Jess Carr.Smith was paroled in 1996 after serving 15 years of a 30-year prison sentence.Smith returned to the Appalachian Trail in May 2008 and was arrested for shooting and wounding two fishermen near where he killed Mountford and Ramsey, authorities said. He later died in prison. Copyright © 2019, ABC Radio. All rights reserved.