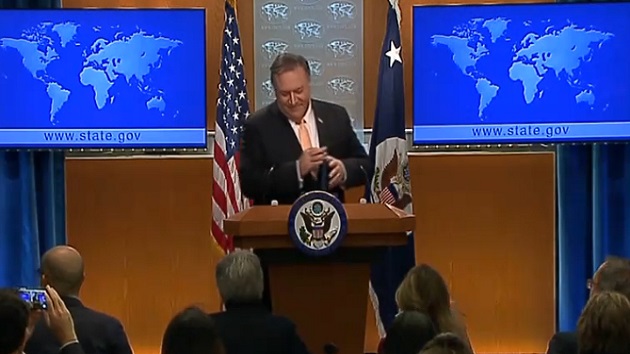 (WASHINGTON) — Secretary of State Mike Pompeo will make his first trip to Russia, arriving in Moscow on Monday and meeting with Vladimir Putin and his Foreign Minister Sergei Lavrov on Tuesday in Sochi.The trip is an important step in President Donald Trump’s pivot back to trying to repair relations with Russia – a goal of his since he was a presidential candidate. But it comes with intense scrutiny over how Trump has approached Russia, praising Putin, downplaying his aggression around the world, and declining to condemn his oppression at home — even as his administration has taken strong action against his war in Ukraine, the poisoning of a former spy in the United Kingdom, and more.It also comes less than a month after special counsel Robert Mueller released his report detailing extensive contacts between the Trump administration and the Russian government, but finding no conspiracy to interfere in the election.Last Friday, Trump and Putin spoke, with the president saying Putin “sort of smiled” as they talked about how the Mueller investigation “started off as a mountain and it ended up being a mouse.””Getting along with Russia and China, getting along with all of them is very good thing, not a bad thing. It’s a good thing,” he added.A senior State Department official wouldn’t say if the long-awaited release of that report is why Pompeo is now ready to head to Moscow. But they told ABC News the trip is a “good opportunity… to take that conversation [with Russia] to a higher level and for a frank exchange of views on where the challenges and opportunities are.”On Monday, Pompeo and Lavrov met on the sidelines of the Arctic Council summit in Finland after three phone calls in the last three months. That followed a period of near silence and high tension, with no calls since August 2018 and Trump canceling a formal meeting with Putin at the G20 in November over Russian seizure of three Ukrainian vessels and 24 sailors.Pompeo will be watched carefully back in Washington, especially by critics in Congress, for how he treats the Russians. While the president has consistently carried a different tune, calling for warmer relations with the government that meddled in the 2016 U.S. presidential election to support him, Pompeo has staked a middle ground, saying there may be areas where the two countries can work together.”Where we have concerns, we’re going to raise them directly, narrow those differences, and find areas where we can cooperate to protect and advance our interests,” the official said, speaking anonymously to brief reporters on behalf of the department.Ahead of the trip, the State Department pulled at least one punch. Spokesperson Morgan Ortagus released a statement Thursday that praised the conviction of two Russian intelligence officers in Montenegro as “a clear victory for the rule of law, laying bare Russia’s brazen attempt to undermine the sovereignty of an independent European nation.”But the next day, the official statement disappeared from the department’s website. The State Department declined to comment, but Foreign Policy magazine reported that the statement was released by mistake against Pompeo’s wishes.Trump has similarly been slow to criticize Putin’s government, from telling Fox News in his first year in office, “You think our country’s so innocent?” to denying Russia is involved in Venezuela last Friday. He’s also continually cast doubt on the Kremlin’s cyber attacks and interference in the 2016 election, infamously saying alongside Putin in Helsinki, Finland: “President Putin says it’s not Russia. I don’t see any reason why it would be.”Among the top issues on the table, Pompeo will look for ways to counter terrorism together, resolve the conflicts in Ukraine and Syria, deal with regional challenges like North Korea, and negotiate new arms control agreements.”We are not going to solve these issues overnight, but we have to be engaging to create opportunities for progress,” the official said, pointing to talks on North Korea, Afghanistan, and counterterrorism as successes so far.But the other issues will be difficult, given that Russian interference in Ukraine and Syria has caused and perpetuated those wars, respectively, and that Russian violations of arms control pacts like the Intermediate-Range Nuclear Forces Treaty have pushed the U.S. to withdraw from the INF Treaty and possibly others, according to U.S. officials.Still, Pompeo told ABC News he hopes “we can find places where we can have overlap in our interests… It makes perfect sense that any place we can find where we have overlapping interests, we work along with the Russians,” he told ABC Chief White House Correspondent Jonathan Karl on “This Week” Sunday.