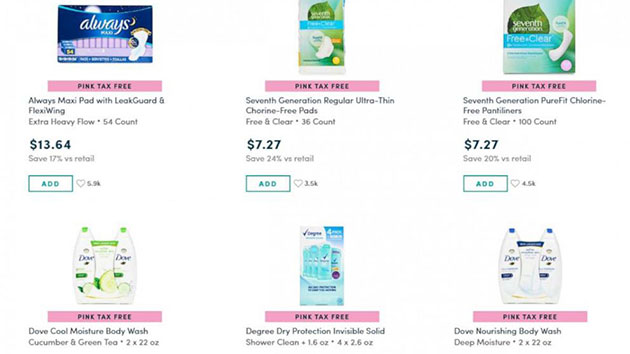 (NEW YORK) —  When Chieh Huang started the online bulk shopping club Boxed in 2013, he didn’t know what the “pink tax” was. Now, it’s an issue key to the company’s identity.

As CEO, Huang found out about the gender-based markups from an employee. It wasn’t long before the company began giving rebates to shoppers to make up for the luxury tax imposed on tampons and maxi pads and markups in toiletries and other items that cost more when they come in supposed feminine colors and scents. The company explained why it was doing this in a March blog post titled “Pink Tax: Why Boxed Is Taking a Stand Against Unfair Gender Pricing.”

In a 2015 study, the New York City Department of Consumer Affairs compared about 800 products from over 90 brands — from toys to clothing to personal care items — that clearly came in male and female versions, and found that 42% of the time, women’s products cost more.

Boxed employees have also been testifying about the pink tax to state legislatures for the past couple years. Marketing Director Nitasha Mehta — who originally educated Huang about the issue — has testified in the Colorado House of Representatives and in the Nevada State Assembly to advocate repealing the tax on tampons, the company said. The issue is gaining traction; on Tuesday, California Gov. Gavin Newsom announced the state would drop the state duties on diapers and tampons ahead of revealing his budget.

“We have also begun working with legislators in Ohio and Michigan to help support similar repeal efforts in those states,” Huang wrote in the blog post.

This week, Huang talked to ABC News’ Cheri Preston about the pink tax, doing the right thing, and whether he’d ever take his company public. The following has been lightly edited for length and clarity.

A lot of women are familiar with the pink tax. A lot of men may not be. So why don’t you go ahead explain it?

So the pink tax, for the folks out there that don’t know, is actually a tax that’s twofold. One is legislative. In 30-plus states in America, we still tax women on feminine care products like tampons and pads as if they’re luxury good items. And in a lot of those same jurisdictions, “necessities” like Rogaine and condoms are not taxed because they’re necessities, and tampons and pads aren’t.

The first time I heard that I was like, “That can’t be right.” If my wife called me and said, “Hey could you bring some pads on the way home?” And I said, “Listen hon, [Gross Domestic Product] is looking kind of soft this month, luxury good items — probably not this month, but I promise we’ll get this luxury good next month.” I mean it wouldn’t end well for me when I got home, right?

Exactly. Can we get that Jag[uar] or a box of tampons? Let me think. That’s a luxury item, right?

So for all the guys out there, that was my internal test to say, “OK, this can’t be right.” And so that’s the legislative portion of it. But there’s also this societal portion of it, which is, a pink razor generally costs more than a blue razor, a pink soccer ball costs more than a blue one. Identical items, or virtually identical, just one’s a different color and it’s kind of unfair.

So how is Boxed fighting that? What are you doing? There are sort of two different things when it comes to this pink tax.

Yeah, so we fight it the same way on both the luxury, the actual kind of legislative tax, and also the societal tax.

We actually rebate that tax back to you. So if it’s a sales tax that we have to collect, we still have to collect it by law. So, we collect it, but we give you a discount so it’s as if you were not taxed on it. If we find a disparity in prices simply because of the color of an item, we then lower the price of the unfairly priced item. So, the customer is not unfairly taxed on Boxed. And unfortunately, after a few years of doing it, we’re still the only national retailer that that has taken the stand.

So, why do you think it has taken so long? I mean the money is obviously for an item. It’s going to the company that creates it. They’re the ones who are saying they don’t have an interest in cutting that tax, but you would think maybe other retailers would?

Totally. I think at the end of the day, most companies out there…they like doing what’s best for their bottom line better than what’s doing what’s best for society. And that’s fair given that, you know, for-profit companies are for profit. But I think what they’re kind of missing is that doing the right thing, which may have short-term impacts to your bottom line may actually be the right move in the long-term.

For example, we’ve now rebated a ton of money back to customers, probably several dollars. When you look back, though, you could say, “OK, that’s real money that could have went to our bottom line.” But at the end of the day, when you actually survey customers that shop on Boxed, for a huge percentage of female customers, it is this reason they found out about Boxed and it’s the reason they shop with us.

At the end of the day, that’s also how people are starting to shop these days. If you just think about things from an economic perspective, you know as kind of the speed of delivery as the price they all kind of get to this equilibrium where you’re paying great low prices on fast, free delivery everywhere. Then you have a choice of whether you’re going to take an Uber or Lyft, whether you’re going to buy your razors from Company X or Boxed. So we feel like over time that will be a trend.

At the same time though, we are not a charity. I am not a social crusader. It’s just, you know, treating folks right. The majority of our customers are women and treating them right can actually be pretty good for the bottom line in the medium-to-long term, even if not in the short-term.

How are you doing when it comes to Amazon and other big competitors? Walmart, Target. Everybody is trying to get you to shop from home. But you’re saying, ‘OK we’re a smaller company,’ but does that mission statement make a difference?

It absolutely does, for a few reasons. When you think about, you know, say, Uber versus Lyft. Lyft is not cheaper than Uber. Lyft is not more convenient than Uber yet, they have millions and millions of customers for no other reason ostensibly than it’s good service and people like the brand. We still believe in that, even though we have to be sharp on pricing. We have to be fast on delivery.

The other thing is that we’re kind of like an enigma. So, we started in a garage. Shipping toilet paper out of a garage in the suburbs. All the kids around like our neighborhood would avoid our garage and I’d be that strange guy with, like, a lemonade stand gone wrong. They would avoid me, and now, taking on the big giants has been, I don’t know, a really difficult kind of battle to fight, but also one that I think people have been gravitating toward as the underdogs.

When we’re talking about Uber and Lyft and all these other companies and their big IPOs, will we see Boxed take the jump and then be just for-profit in the near future?

Not as long as my heart is beating and my chair in the CEO’s seat is warm — we will not make those tradeoffs. As long as I’m here. we’ll do the right thing.

You’re going to keep it a private company?

Private company? We’ll do the right thing. But I think, you know, maybe being public one day will be in our future. When you think about all big retailers and all big consumer brands in America, most have access to the public markets at some point in time.

So you’re saying that you’re going to keep this philosophy even if you do go public?

Yeah. Because I fundamentally believe that it is the right business ethos as well. So, again, we’re not social crusaders. We’re not a charity, but I think in the medium-to-long run, this will pay off.

Think about some of the most iconic brands and think about some of the folks that we compete with. Costco. Folks know Costco treats their employees really well. Yet, they post record profits every single quarter. And so I don’t think it’s mutually exclusive. I think if you think in the short run, definitely. There’s only one dollar and you’ve got to split it between your employees, your customers or your pocket? Sure. But in the long run, I don’t think it needs to be a zero sum game.

I think you’re right. I think that a lot of a lot of companies are realizing that there’s more to it out there than just profit. And the ones who are focusing just on profit, they’re losing these days.

Totally. When you just look at how well-educated the new consumer is because of social media, because of word of mouth, because of all the different forms of media that they’re exposed to, it’s not just going to the store and making that decision because you’re looking at a brand on the shelf. There’s so many other factors that have led you up to that point of decision outside of just the price and how you get it.

For women, let’s just get over this idea that having a period is a luxury. Sorry. It’s not. As a woman, I can say that. It’s not.

Four things to know about omicron and holiday travel, gatherings
Epstein accuser on Ghislaine Maxwell: She was his ‘chief orchestrator’
“Smell you later”: Laurence Fishburne, Kristen Wiig and Will Forte in bonkers trailer to Peacock’s ‘MacGruber’
New York City poised to give noncitizens right to vote in local elections
‘Live in Front of a Studio Audience’ returns with lighthearted take on ‘Facts of Life’ and ‘Diff’rent Strokes’
E! People’s Choice Awards 2021 — The winners