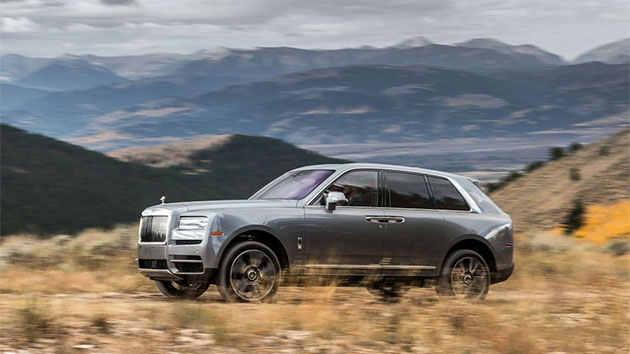 (NEW YORK) —  It’s a tank-like, angular monstrosity that would be the vehicle of choice in a zombie apocalypse. And with a staggering $1.85 million starting price, the Karlmann King sport utility vehicle leaves the Rolls-Royce Cullinan, once the world’s most expensive SUV, in the dust.

But these features are, of course, merely a jumping-off point.

One buyer requested strobe lights, gold accents, snake and crocodile leather and a personal logo emblazoned on the vehicle – all for a cool $4 million.

“These SUVs are designed to be really unique,” Michael Nothdurft, sales director at Karlmann King, told ABC News. “Each one can be customized.”

“It takes an average of 12 months to manufacture one car. They’re all handmade,” said Nothdurft.

A handful of celebrities have inquired about ordering one, according to Northdurft, though the SUV is technically not street-legal in the U.S. Company executives expect that will change by 2020.

For the ultra wealthy, however, the bigger and more over-the-top, the better.

“It’s become a sport among young billionaires and their friends — who has the most ostentatious thing, who has spent the most money,” Ed Kim, vice president of industry analysis at AutoPacific, told ABC News.

The Cullinan, which launched in 2018 with a starting $325,000 price tag, “is big and imposing and not a particularly beautiful work of art,” Kim said. That won’t stop the one percent from flocking to order one, especially newer and younger customers who may never have considered a Rolls-Royce before, he noted.

By contrast, the average price of an SUV sold in March in the U.S. was $36,733, a 2.3 percent year-over-year increase, according to Kelley Blue Book.

Rolls-Royce sold 4,107 vehicles in 2018, the highest in the British luxury company’s 115-year-old history, buoyed in part by deliveries of the Cullinan.

To stand out in the crowded SUV space, ultra luxury carmakers like Rolls-Royce, Bentley and Lamborghini are offering perks and performance metrics unheard of just five years ago, according to Brandon Mason, a director in PwC’s automotive practice. Bentley and Lamborghini, for example, are in an arms race for the world’s fastest SUV title. Bentley says the Bentayga Speed SUV (price still TBD) can hit a top speed of 190 mph, barely edging out the $200,000 Urus.

“At these price points, consumers are expecting all the bells and whistles,” Mason told ABC News. “People who buy these SUVs don’t care about price. It’s just exclusivity.”

The latest technology, amenities and higher trim levels can tack thousands of dollars onto the base price of some of these premium SUVs that already cost in the six figures. That means more money for automakers and profit margins topping 15 percent.

“As long as there is appetite to purchase products like this, there is a decent business case,” Mason said. “Automakers will continue to push the limit. The high-end SUV trend will continue.”

“The profit margins have always been remarkably higher on SUVs than cars,” she told ABC News. Plus, “it’s very American to drive one,” she added. “You feel much safer on the highway than in a car.”

According to Jeff Schuster of LMC Automotive, an independent automotive global forecasting and market intelligence firm, carmakers are “exploiting” every shape, size, configuration and price point of SUVs.

“From high performance to ultra lux, we have the full spectrum now,” he told ABC News. “We’re beyond the initial interest — ride height — of SUVs.”

Even Schuster, an industry veteran of 23 years, is amazed at the current offerings in the marketplace. He said the expansion, particularly in the super premium segment, would have been comical just a few years ago. But the success of Lamborghini’s Urus and Bentley’s Bentayga as well as the upcoming SUVs from Aston Martin and Ferrari have shown that “we’ve cracked through the stereotype that you can’t have an SUV if you’re a supercar performance brand,” he said.

“These brands don’t want to miss out on a trend and an opportunity to increase sales and brand image,” he added.

Lamborghini said the Urus helped push sales to a new record in 2018. The Italian automaker delivered 5,750 vehicles last year, a 51 percent increase from 2017. Seventy percent of Urus buyers are new to the legendary brand, including women.

Part of the Urus’ appeal is that it still embodies what Lamborghini is famous for — ferocious performance, thrilling acceleration, a throaty croon and precision handling — while actually providing a back seat and trunk space. Moreover, the Urus does not require its passengers to be agile and lithesome; getting in and out of the sport ute is a breeze compared to Lamborghini’s traditional supercars.

The wait list for the 641 hp, twin-turbo V8 SUV is at least a year. There are also rumors that Lamborghini will unveil a faster, more powerful and undoubtedly more expensive Urus in the next two years.

“There’s definitely a race for the fastest, most expensive and luxurious SUV,” Schuster said. “We could see SUVs reach 200 mph or 210 mph,” he said.

“If a customer really, really wants to have an SUV shape, why not?” he said. “But how many people [will buy one]?”

The trend toward larger, heftier and outsized SUVs, however, does not portend the return of the Hummer, General Motors’ beefy, all-terrain, gas-guzzling SUV that civilians enthusiastically drove until gas prices skyrocketed and GM decided to shut down production of the brand in 2009.

“It’s highly unlikely GM has the resources to bring it back,” Kim said. “They don’t need another brand to manage. GM got burned with the Hummer and was stuck with tons of unsold inventory. GM’s priority now is its electric vehicle development.”

Even as SUVs have generally become more extreme in price and styling, automakers are still producing inexpensive models.

As for the Karlmann King, industry insiders have some serious concerns.