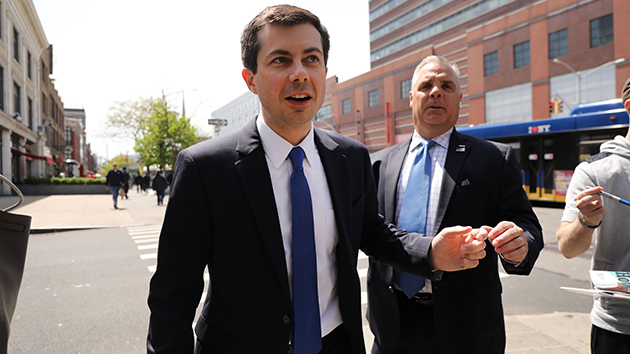 Spencer Platt/Getty Images
Posted on May 11, 2019 by ABC News

(NEW YORK) — Hollywood, known for cultivating characters, greenlighting mega blockbuster stories, and investing millions into making them a success, appears to be closely following the Pete Buttigieg storyline.”Hollywood loves an underdog story, he’s an unlikely hero,” said one senior entertainment executive adding that he was struck by the fact Buttigieg was exactly the same person in front of a room full of entertainment executives and actors, as he was on cable news.”He’s a unicorn candidate, a gay veteran Christian who is a mayor. When are you ever going to get that combination in one person? He appeals to a diverse population. His own personal story feels like a storybook fairytale,” said West Hollywood Mayor Pro Tempore Lindsey Horvath, a co-host of a large fundraising event for Buttigieg on Thursday.Buttigieg, like a number of Oval Office hopefuls, is being fêted and vetted by Hollywood elites whose financial support and star power could offer a much sought-after boost to 2020 presidential campaign efforts. During his 2008 and 2012 campaigns, President Barack Obama netted high profile support from a number of celebrities.For example, rap mogul Jay-Z and megastar wife, Beyoncé, were vocal Obama supporters and held a series of celebrity-hosted fundraisers for the president’s re-election campaign.In just the last two months Buttigieg has appeared on Ellen, Bill Maher, and even got a high-profile mention from Oprah (she told the Hollywood Reporter, “I call him Buttabeep, Buttaboop.”) He’s also rubbed elbows with Mandy Moore, and attended a fundraiser last night at Gwyneth Paltrow’s home co-hosted by Bradley Whitford.Hours before, he attended a soirée with Gina Gershon, Christopher Guest and Laurie David, according to a source with direct knowledge about the event.A co-host for Buttigieg’s fundraiser at megastar producer Ryan Murphy’s home next month said, “It’s a whole new script and a new approach. … That’s what Hollywood is about, getting out there and telling a story and Pete is about telling that story.”It’s a story capable of drawing big crowds — and selling out tickets. Along with Horvath, Sue LaVaccare co-hosted Buttigieg’s event at the Abbey, a famous gay bar in West Hollywood, Thursday evening.Seven hundred people showed up including Kevin McHale from Glee.”I had to turn away many, many others,” she said.But while she is intrigued by Buttigieg, she is already committed to bundling for Kamala Harris. She says she’s not alone, and that lots of people are donating or supporting more than one campaign.The Abbey’s CEO, David Cooley, also hosted one of Harris’ first Los Angeles fundraisers.LaVaccare says for her, it’s about making the field as strong as possible.”My goal is diversity, I want diverse perspectives and voices and ways of being and doing in our political system because for me it hasn’t been going well,” she said. “I want to promote and support people who are the majority in our country but are the minority of representation.”One prominent Hollywood agent agrees with the idea that the city’s entertainment elite isn’t unified behind one person yet.He described finding Buttigieg in person to be “very measured and thoughtful in his answers, incredibly bright and knowledgeable about the issues,” but cautions, “people in Hollywood are getting educated and still seeing who they want to get behind.”Other candidates, the city has been buzzing about include former Vice President Joe Biden, who recently attended a fundraiser by media mogul Jeffrey Katzenberg. Harris has also held multiple celebrity-filled fundraisers in the city, using her deep ties in the Golden State to fuel her support.The entertainment executive says people are keeping their options open- because few people want to left out of the eventual nominee’s inner circle.”I know some people literally didn’t return Barack Obama’s calls when he was a less well-known figure than he became,” he says, adding Buttigieg’s storyline still has a long way to go, “Right now the script seems very far fetched but we’re paying close attention. It’s exciting to see it take shape.”Copyright © 2019, ABC Radio. All rights reserved.