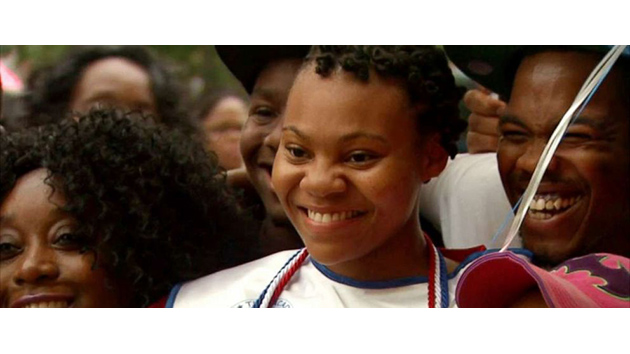 (WASHINGTON) — As she sat in the well-appointed “commuter lounge” of Georgetown University, Rashema Melson drank in her surroundings as she drank an ice cold bottle of mineralized, specialty water.“It’s hot, I’m tired, and my feet hurt,” Melson, 23, said as she waved her hand to cool herself off. She lounged with her feet just shy of the edge of the furniture. “But my feet have survived worst stuff than this, I still walk around barefoot until this day and people look at me like I’m crazy but if they only knew what I’ve been through.”Melson, a born and raised Southeast Washington D.C. native who has lived a majority of her life in either a homeless shelter, public housing, and even an abandoned house at one point, will be the first in her family to graduate from college when she crosses the stage at Georgetown University next Saturday. After attending three different high schools, Melson was the valedictorian of her class at Anacostia High School and earned a full scholarship to college.Next week she will receive her bachelor’s degree in justice and peace studies from Georgetown University something she says she didn’t believe was possible because of the many struggles she has encountered in her life.“My life has always been rough,” Melson said. “Homeless or not, in southeast, it’s rough regardless, the circumstances are just rough due to the fact that we don’t have the tools or resources as everyone else,” she said as she twirled her finger around in a circle pointing at her surroundings on campus – a lush enclave filled with stone buildings and modern amenities.Along with having to constantly change schools, she said she was never able to keep a steady friendship with her classmates or let alone a steady relationship with anyone except her mother and siblings. Her mother was a single mother, Melson and her siblings have different fathers which Melson says are each “either dead or in jail.”“People really emphasizes a lot on the homelessness because that’s what grabbed their attention but there’s a lot that I don’t share,” she says. She explains her time being homeless is like anyone else who has been in a similar situation.At times she slept on a cot shared between her and her siblings waking up to the sting of bed bug bites. She has taken what she describes as “three-minute showers” due to not having hot water. And she ate food straight out of a can with a spoon because there were no plates to eat on.But besides the homelessness, Melson said she has suffered from Bulimia, has caused herself self-harm, and was also a victim of sexual assault something that she is still very hard for her to discuss.“It’s just so much and I think that’s what people don’t understand when you are going through circumstances it’s just not one thing there is A LOT going on,” she says.When she was younger, Melson said that education, along with her love for reading and watching movies, helped her focus.While reading books like the Bailey School Kids books and eventually books by Nora Roberts, Melson said reading other people’s stories while going through her own struggles helped her imagine what her life could be outside of a dark place.“Reading books gave me an insight into a world that I have never ever seen in my life,” she said as her eyes widened. “People really get rich and buy a house? People really get their dream jobs? It was like a fantasy land to me.”Now at 23, a week before graduation, Melson credits her new friends who she describes as life friends for the reason she was able to finish her studies. After freshman year at Georgetown, Melson left for a year to marry her longtime military boyfriend who is now her ex-husband.She ultimately decided to return to Washington D.C and to Georgetown. During this comeback stage of her life, her friends gave her the motivation she needed.“I’ve been complacent before and trying to get your drive back is not easy,” she says. “But Wesley, Dajha, and Terelle have been my core piece, they make me feel normal and I know that after graduation, we will all still be friends and that’s something that I have never said before.”Her friend, Wesley Bowers, 19, said that her experiences have motivated him to work harder and appreciate his opportunities.”She doesn’t ask anyone for anything, she doesn’t ask for much but she is always the first person to give,” said Bowers, who is also majoring in justice and peace studies at Georgetown University and is a linebacker for the school’s football team. “She is just a very caring person and a good friend so finding out her story made her even better in my eyes in a sense.””I am extremely lucky to have a friend like her, I tell her that all the time,” he said. “I know that if anything happens to me or my family, she will drop whatever she is doing, she always puts other people first.”As for Melson, she really wants people to know there is much more to a person than just being homeless.“People tell me all the time ‘I would’ve never guessed,’ and I say ‘Guess what?’ “Melson explains that people often ask her about being homeless. For Melson, she doesn’t take any offense personally but just wants people to have more of an understanding of what being homeless means.” Oh I didn’t know that you can spot homeless people a mile away!” she says grinning. “How do you know that I am homeless? because am I supposed to look dirty? Am I supposed to stink? What does that mean? It’s not offensive when people do it but you really can’t tell anything from looking at a person.”Melson said her biggest piece of advice for anyone facing adversity is to never give up because everything does eventually get better in time.“Just know that your blessing is there waiting for you, you just have to go get it.”