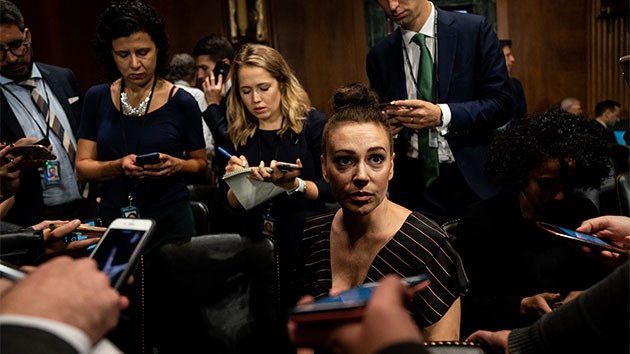 Erin Schaff-Pool/Getty Images
Posted on May 11, 2019 by ABC News

“Our reproductive rights are being erased,” the actress tweeted on Saturday. “Until women have legal control over our own bodies we just cannot risk pregnancy. JOIN ME by not having sex until we get our bodily autonomy back. I’m calling for a @SexStrike. Pass it on.”

By Saturday afternoon, #SexStrike and “Alyssa Milano” were two of Twitter’s top 10 trending topics, and Milano’s tweet had close to 25,000 likes and nearly 9,000 retweets.

Georgia Governor Brian Kemp signed into law this week one of the most restrictive abortion laws in the nation. It effectively prohibits abortion once a doctor can detect a fetal heartbeat, which can occur as early as six weeks into a pregnancy. Like other abortion bans passed in recent months, the law faces legal challenges and could end up before the Supreme Court, where conservatives now hold a majority.

Sex strikes have been in activists’ arsenals at least since ancient Greece. In Aristophanes’ comedy Lysistrata, women boycott sex as a way to pressure men to the peace table to end the Peloponnesian War. More recently, in 2003, Leymah Gbowee organized a sex strike in Liberia to help end her country’s civil war. She was later awarded the Nobel Peace Prize.

On social media, critics chimed in from both sides of the political divide.

Opponents of abortion rights sarcastically applauded Milano’s embrace of abstinence, which they argue can help prevent unwanted pregnancy, while some who share Milano’s pro-choice stance said the idea that sex is something that men want and women provide is old-fashioned and absurd.

Milano is not the only celebrity to use star power to protest the new law.

J.J. Abrams and Jordan Peele, whose new HBO show “Lovecraft Country” will begin production in Georgia in several weeks, said that, while there were no immediate plans to move the show out of state, they would “stand shoulder to shoulder with the women of Georgia” and donate their fees to groups that are “leading the charge against this draconian law.”

“Governor Kemp’s ‘Fetal Heartbeat’ Abortion Law is an unconstitutional effort to further restrict women and their health providers from making private medical decisions on their terms. Make no mistake, this is an attack aimed squarely and purposely at women,” the two said in a statement, adding that the donations would go to the American Civil Liberties Union (ACLU) of Georgia and Fair Fight Georgia, the group led by Georgia Democrat Stacey Abrams.

Georgia offers generous tax credits to attract TV productions, and in recent years the state has won a lot of business from the film and TV industry. “Avengers: Endgame,”

“The Walking Dead” and the first season of Netflix’s “Queer Eye” were all filmed there.

After releasing his statement, Peele retweeted a 2018 tweet from Stacey Abrams’ in which she asked “all of our entertainment industry friends” not to boycott Georgia as part of a well-meaning political protest.

“The hard-working Georgians who serve on crews and make a living here are not to blame,” Abrams said at the time.

The Writers Guild of America East and West released a statement in March condemning the “draconian anti-choice measure” and saying that, if passed, it would “would make Georgia an inhospitable place for those in the film and television industry to work, including our members.”

Biden administration to pause most ICE deportations, among other immigration policy shifts
US Air Force changes hair requirements for women
Lawmakers outraged at images of National Guard sent from Capitol to parking garages
Woman who made Bernie Sanders’ viral inauguration mittens says they’re not for sale
Austin makes history as first African American to lead Pentagon
“I was just trying to keep warm!” Bernie Sanders laughs on ‘Late Night’ about his meme-ready picture