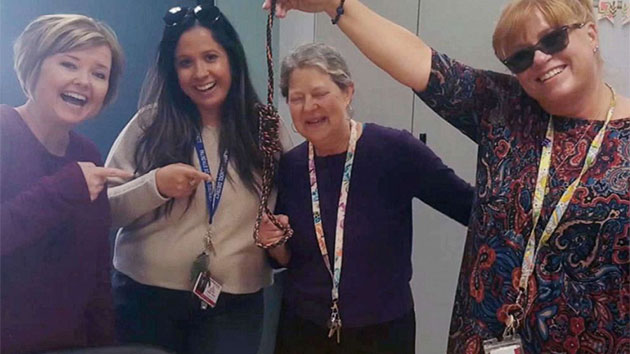 (LOS ANGELES) —  Parents are calling for harsher punishments for four California teachers and a principal who were placed on administrative leave after a photo circulated showing the teachers posing with a noose.

The Palmdale School District was notified on May 8 that “an incident involving the discovery of a noose and possibly inappropriate responses to that discovery occurred at Summerwind Elementary School,” a statement from the school district’s superintendent Raul Maldonado said on Facebook.

The school’s principal has been placed on administrative leave “pending an investigation of the matter,” the statement said.

The four teachers seen in the photo holding the noose and pointing at it while smiling were also placed on administrative leave, according to ABC Los Angeles affiliate KABC-TV. They have not yet been identified.

A parent of a student at the school told KABC that the noose was initially found hanging on a wall in the school earlier this month and that there was also a video showing the teachers making jokes about the noose.

Some parents said their children would no longer attend the school because of the photo, KABC reported. One of the parents, Breyan Clemmons, told the station that the incident “hurt [her] to the core.”

“It’s disgusting and I’m outraged,” Clemmons told KABC. “I want to see some action done and not just this administrative leave.”

Another parent, Tierra Harris, explained to her daughter during an interview with KABC why she was pulling her from the school.

“They use that to hang African American people. That’s what they do. And kill them. And they still do it to this day,” Harris told her daughter. “I don’t want you going here because I don’t want you to feel like that.”

KABC reported that the school district is looking into the context of the photograph and who brought the noose on campus.

“It makes us angry because I know that it’s not a reflection of our community,” Maldonado told KABC. “We don’t tolerate that type of behavior in our community and our school district. We hold our employees to the highest standards with high expectations.”

The Palmdale School District and Palmdale Elementary Teachers Association did not immediately respond to ABC News’ requests for comment.