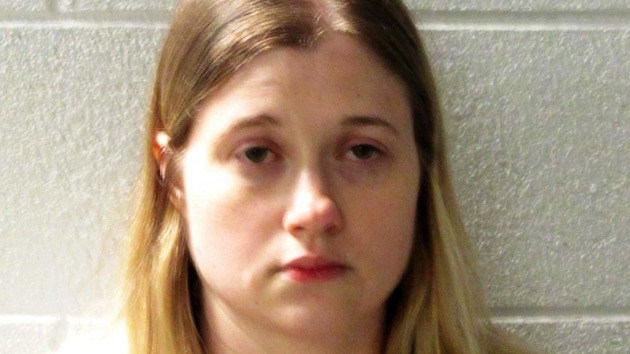 Henderson County Sheriffs Office
Posted on May 10, 2019 by ABC News

(ASHEVILLE, N.C.) — A 35-year-old North Carolina mother has been charged with attempted first-degree murder of her 7-month-old daughter.Asheville police in North Carolina received a 911 call Thursday saying Krista Noelle Madden and her baby, Shaylie, had been kidnapped. The call did not come from Madden, police said at a press conference Friday.Authorities were able to trace Madden’s cellphone to Henderson County and police officers were sent to the area where her phone had been tracked. They also received a call that an abandoned car was found on a “remote, gravel, private drive” near the location of the Madden’s phone.Upon arriving at the scene, police found Madden, who said she had escaped a kidnapping. The abandoned car was identified as hers.Police dogs found no trace of anyone else in the area except for Madden, Henderson police said at the press conference.Later Thursday, police received another call just before 8 p.m., this time from a family saying they found a baby who appeared to have been tossed into a ravine.The baby was found after a woman went to check her mailbox and thought she heard a baby crying and called her husband for help.”[The husband] arrives at the scene, descends about a 75-foot ravine to find the child alone with a car seat,” Henderson County Sheriff Lowell Griffin said.Shaylie, who was admitted to a local hospital, is believed to be in good condition, according to Griffin.Police now say there is no indication a kidnapping took place, although it is possible the original 911 caller truly believed Madden and Shaylie had been kidnapped.Police took Madden into custody Thursday night and served her with an arrest warrant.Madden, who is being held on $750,000 bond, is due in court Friday.Copyright © 2019, ABC Radio. All rights reserved.