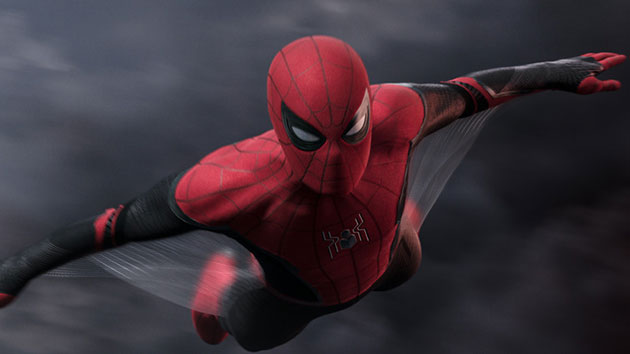 Courtesy Sony Pictures
Posted on May 10, 2019 by ABC News

The latest Far From Home trailer, released Monday, became the biggest digital launch in the history of Sony Pictures Entertainment, with 135.2 million views in 24 hours — a feat that might not have been reached if Holland, who stars as the web-slinging superhero, hadn’t figured out how to post it to social media.

“It’s no secret, I’m not very good at Instagram,” said Holland, who called himself, essentially, an old man for having to FaceTime his co-star, Zendaya, who wound up sending him instructions on how to post a video to Instagram.

Spider-Man: Far from Home takes places after Avengers: Endgame, which prompted Kimmel to ask a question surely on a lot of people’s minds: if it’s been five years since Thanos snapped half the universe away, why are Peter Parker and his pals still in high school?

Holland could only turn to his co-stars and asked,  “Yeah, why are we still in high school?”

Holland and Smulders, the latter of whom plays agent Maria Hill in the MCU, were both present at Tony Stark’s funeral in Endgame. But Holland, who has a well-documented habit of unintentionally divulging spoilers in interviews, said he was kept in the dark up until the moment he showed up on set.