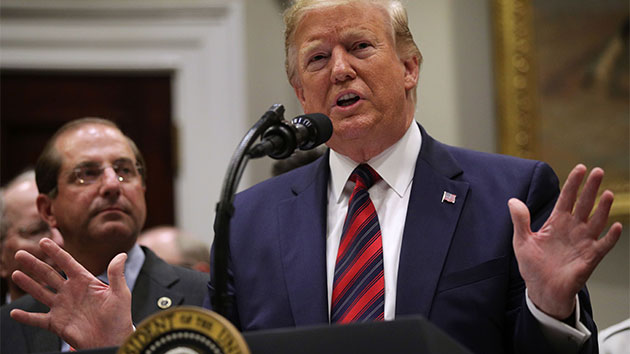 (WASHINGTON) — As Republican states across the country barrel toward more and more restrictive abortion legislation, President Donald Trump has homed in on a key issue for his 2020 platform that instead puts the focus on Democrats: late-term abortion.

The president’s re-election campaign, backed by anti-abortion rights groups, sees the controversial wedge issue as a winning platform that will galvanize the president’s base. It’s also an issue that, despite Trump’s misrepresentation of the rare and complicated circumstances that lead to abortions later in pregnancy, is not supported by most Americans, making it a difficult topic for Democrats who advocate for abortion rights to address.

The latest example of Trump’s elevated rhetoric on the issue and at least the fifth time Trump has worked it into public speeches since late-March came on Wednesday at a campaign rally in Panama City Beach, Florida.

“Democrats are aggressively pushing late-term abortion, allowing for children to be ripped from their mother’s womb right up until the moment of birth,” Trump said to familiar shouts of disapproval from the crowd.

“Late-term abortion,” a non-medical term largely used by anti-abortion groups, accounts for just 1.3 percent of all abortions, according to a 2015 report from the Centers for Disease Control, and mostly happens because of complications for the viability of the fetus or the woman that poses a risk to health or life.

In 43 states across the U.S., abortions after a certain point in pregnancy are prohibited unless that’s the case, according to the Guttmacher Institute.

But it’s not a new fight, and certainly not surprising coming from a president heralded by anti-abortion advocates as the “most pro-life president ever.”

In fact, in the face of a new wave of restrictive abortion laws aimed to overturn Roe vs. Wade while the Supreme Court has a conservative lean — laws in states like Georgia, which just passed an abortion ban after six weeks, and Alabama, which is on its way to passing a ban on all abortions as soon as a fetus is “in utero” — Trump’s push to focus on late-term abortion could even be seen as traditional, said abortion historian and law professor Mary Ziegler.

“For some time, soft spots for the pro-choice movement were seen to be later abortions, and so the kind of classic, incremental approach to attacking Roe vs. Wade would be to focus on areas where the public is already skeptical, like later abortions, and go from there. To paint your opponent as extreme — and claim that you represent mainstream America, which I think is what Trump is trying to do,” said Ziegler, a professor at the Florida State University College of Law and author of two history books on abortion.

But, like much of what the president does, his strategy is far less traditional because of the way he is doing it.

“It is traditional in the sense that those arguments have always been made by pro-lifers, but not the ones that were the most politically sophisticated. Those were kind of made much more by, for example, people protesting at clinics, but those were seen to be politically counterproductive by a lot of the larger, more sophisticated pro-life groups,” Ziegler said.

That rhetoric, Ziegler said, is often considered too extreme to be effective.

“We’re seeing President Trump make comments about abortions later in pregnancy that are just out beyond the pale,” said Nash, who works for the abortion rights advocacy group the Guttmacher Institute.

While they do not reflect the majority of circumstances that lead to abortions later in pregnancy, comments from Trump and his administration about “executing” babies and “ripping” them from the womb may resonate with the large majority of voters who do not support abortions conducted in the third trimester.

It’s one reason why, in talking about the emotionally-charged issue, the Trump campaign said it is poised to push Democrats into a corner on an area of support for abortion rights – a position Trump and his campaign, through intense rhetoric, will seek to highlight as “extreme.”

“As Socialist Democrats continue to champion infanticide, we will make sure every American sees their extreme views for what they are – support for murdering children,” Erin Perrine, the 2020 Trump campaign’s deputy communications director, said in a statement to ABC News.

The president, for his part, continues to paint Democrats as a party that has “totally abandoned the American mainstream,” as he said in a speech at the Conservative Political Action Conference in Washington in February. “But that’s going to be good for us in 2020,” he added.

Mallory Quigley, communications director for the anti-abortion group Susan B. Anthony List has worked with the White House for two years. She echoed the president’s comments, describing his attention to “late-term abortion” as a winning platform.

“I think by continuing to talk about the life issue, President Trump is mobilizing his base for the next election but also reaching new segments of voters, including people who might vote for Democratic candidates until they hear about their abortion extremism,” Quigley told ABC News.

The president, in part, is speaking from experience. During his 2016 campaign, he often used the same intense terms he’s revived on the campaign trail for 2020.

In an October 2016 debate with Democratic nominee Hillary Clinton in Las Vegas, Trump said it was unacceptable that “you can take the baby and rip the baby out of the womb in the ninth month, on the final day.”

“You should meet with the women I’ve met with; women I’ve known over the course of my life,” she said. “This is one of the worst possible choices that any woman and her family has to make. And I do not believe the government should be making it.”

Fast forward to the run-up to another presidential election, when Trump again laid out his strong views before a national audience – this time at his State of the Union speech this year.

The topic had recently been in the headlines after Democratic legislatures in New York and Virginia both introduced laws that expanded women’s access to abortion later in pregnancy. Controversial comments by Virginia’s Gov. Ralph Northam conversation and quickly found the top of the president’s Twitter feed.

The legislation in New York and Virginia, however, didn’t support the Trump administration’s assertions that Democrats advocate killing babies after they’re born — a claim Democrats vehemently reject. Infanticide is illegal and a 2002 law specifically protects infants who survive abortion.

What both laws did seek to do is lessen some of the restrictions on abortions later in pregnancy, which, in a state like Virginia – where the bill later failed to pass – requires approval from three doctors.

But in the months since the laws passed, Trump has repeatedly sought to paint Democrats as the “Party of late-term abortion.”

Repeatedly, he’s woven the issue in with his most well-worn attacks against Democrats. “Democrats are now the party of high taxes, high crime, open borders, late-term abortion, witch hunts and delusions,” he said at the Florida rally on Wednesday. “The Republican Party is the Party for all Americans.”

Charlie Camosy, an associate professor at Fordham University who studies the ethics of abortion, called the platform politically savvy — albeit unsurprising given the public polling.

“Republicans and Trump are picking up on this because late-term abortion is about as unpopular as anything in the country,” said Camosy, who serves as a member on the Board of Directors for the anti-abortion rights group Democrats For Life.

“I say this as a Democrat. It’s an unforced error on the part of Democrats to really put this out there because the constituency on this is just so small,” he said.

How are Democrats responding as they head toward 2020?

Many 2020 Democratic candidates continue to face questions about abortion later in pregnancy, both in interviews and, in some cases, directly from voters on the trail.

ABC News reached out to the Democratic candidates for a response on Trump’s assertion that they’re the “Party of late-term abortion.”

Most candidates — if they responded — called Trump out for using false and inflammatory rhetoric, while also issuing their broad support for abortion rights. None commented specifically on gestational limits for abortion.

In a statement to ABC News, New York Sen. Kirsten Gillibrand said Trump’s rhetoric was “not only dishonest, but it’s incredibly dangerous.” She called the president’s assertions “100 percent false.”

“Let me be clear — there is zero place for politicians to be involved in these very personal and complex medical decisions, and they should only be made between a woman, her family and her doctor – period, full stop,” Gillibrand said in a statement.

Rep. Tulsi Gabbard, the Democrat from Hawaii, criticized Northam for his comments but thwarted the notion that Democrats support “the horrific policy of infanticide.”

“I’m sure the vast majority of Democrats, like all Americans, would agree,” Gabbard said.

At a recent televised town hall hosted by Fox News, 2020 candidate Sen. Bernie Sanders was asked if a woman should “be able to terminate a pregnancy up until the moment of birth.”

In his answer, Sanders advocated for a woman’s right to decide with her doctor, saying abortions in the third trimester were “rare” and “being made into a political issue.”

But soon after, Sanders was criticized both for going too far and not far enough — a constant challenge Democrats face on the subject.

Mayor Pete Buttigieg of South Bend, Indiana, a religious Episcopalian and a supporter of abortion rights, took aim at the question itself when he was asked on MSNBC what he would say to people who “can’t get past his support of late-term abortion.”

“The way this has been characterized, especially lately, is asking questions that almost in themselves are misleading about the medical situations women face, not to mention the personal decisions they’re confronted with,” Buttigieg said. “These are women facing some of the most unbelievably excruciating decisions, and if they don’t think it’s easy, it’s certainly not going to be any easier for government officials like me to come in and tell them what to do.”

Other Democrats who commented on the issue, including Massachusetts Democratic Rep. Seth Moulton and Mayor Wayne Messam of Miramar, Florida, also advocated for women, along with their doctors, to make their own medical decisions.

An issue that’s already playing out on the ground

Places like Ohio, a conservative swing state that was key to Trump’s 2016 win, offer a glimpse into the challenge Democrats face when talking about abortions later in pregnancy with voters.

Sen. Sherrod Brown, a Democrat from the state, faced tough scrutiny when he voted against a Republican effort to underscore opposition to abortions later in pregnancy last month. His local newspaper slammed him with an editorial about morality, saying “Infanticide is never acceptable.”

In a statement to ABC News, Brown defended his vote, saying the bill pushed by Republicans “wasn’t about protecting women; it was about scoring political points at the expense of women’s health and freedom to make their own healthcare decisions.”

Nevertheless, the issue is bound to come up again and again as the road to 2020 continues.

Jane Timken, the chairperson of the GOP in Brown’s home state of Ohio, said she sees opposition to “late-term” abortion resonate with voters in the swing state — and it’s not going away.

Millennials and young Republicans are particularly “appalled by it,” she said, describing it as a “definite motivator” for the Republican voters she talks to around her state.

It’s too early to tell what each Democrat’s message will be in 2020, Timken said, but she doesn’t believe it will be “a winning message for Ohio.”