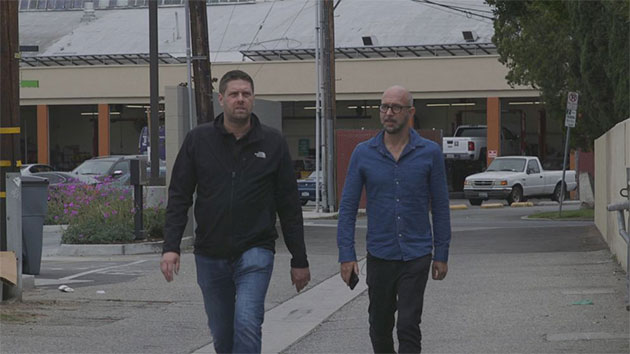 (LOS ANGELES) —  Adea Shabani was a beautiful and hopeful young actress with dreams of making it in Hollywood. She was 25 when she went missing on Feb. 23, 2018.

The story of her disappearance is now at the center of blockbuster true crime podcast — “To Live and Die in LA” — that is hosted by Neil Strauss, a reporter with “Rolling Stone” magazine.

It unfolds in real time, as Strauss works with a private investigator named Jayden Brant to piece together what they believe happened to Shabani, who was last seen in Hollywood with her boyfriend, Chris Spotz.

It all began last February, when the aspiring actress from Macedonia first vanished. Her friends, skeptical of the claim that she was simply on a road trip with Spotz, sounded the alarm to the LAPD.

Eventually, though, the family grew desperate for answers and frustrated by the police investigation, and hired Brant, a private investigator with experience in Los Angeles law enforcement, to investigate her disappearance and help drum up publicity for the case.

It is Brant who brought Strauss in to help with the investigation and document their findings every step of the way. The two have been working as a team on the case for more than a year, filling in critical gaps in the mystery.

“It appeared to be the case pretty early on that there was foul play involved in this case and that it was likely a homicide,” Brant told ABC News.

They say that Spotz became a suspect early on in their investigation. They discovered that he had been engaged to another woman at the same time of his relationship with Shabani.

A month after her disappearance, Shabani’s body was found in Northern California. She died of blunt force trauma, and police looked to find answers from Spotz.

But if Spotz was indeed Adea’s killer, his motive may never be known because Spotz shot and killed himself after a chase with California highway patrol.

“This situation is highly unique in that both there was a homicide occurred, and then our primary suspect committed suicide,” Brant said. “It changes our ability to investigate, because we don’t have the ability to actually speak with our suspect.”

Spotz’s family is now actively trying to help Strauss get at the truth of what happened. “Because now there’s two families devastated by this,” Strauss said.

Spotz’s family recently agreed to hand over his “digital footprint” to Strauss and Brant.

Google data provides a map of Spotz’s movements – with incredible detail – something phone data had failed to provide. Strauss said that the account information can help pinpoint “your exact movements, everywhere you’ve been, down to the minute.”

“It just so happened that Chris Spotz never turned his phone off. So, we were able to see the moment he picked up Adea, the day she disappeared, and track that route,” Strauss told ABC News.

“I’m almost loathe to say it, because I feel like if somebody goes missing or something happens, they’ve turned this off, we won’t find out what happened,” Strauss said. “We wouldn’t know what happened if Chris had this off.”

The data began to gave Strauss a tick-tock of the last day Shabani was seen alive.

“Her phone bill data stops at 12:50. We know he arrives in her house at 12:48. So we can just pretty much figure out that he came in around this time, and something with her phone between them,” Strauss said. “Maybe he asked her to turn it off. Maybe he turned it off himself. But we know that’s connected to him arriving there.”

They say the data also shows Spotz’s phone in the area where her body would eventually be found in Northern California.

At the time of Spotz’s death, LAPD said they believe he was responsible for Shabani’s murder and consider the case closed.

But with what they say is Spotz’s Google location data in hand, Strauss and his team aren’t satisfied with that conclusion and have been retracing the days leading up to his “roadtrip” with Shabani, convinced he may have had help in her murder.

“She told a friend that she was going to the funeral of Chris Spotz’ uncle,” Strauss said. “Where suspicions started to get raised was when we called his family and they said he doesn’t have an uncle who passed away.”

“They brought us to a hardware store and an apartment building in North Hollywood which they believe to be two of Spotz’s last stops before picking up Shabani,” he said.

“We know that Chris Spotz stopped here on his way to see Adea,” Strauss said. “If we can find the person he visited, we can find out what he was doing there. So we’re checking to see the current tenants to see if it’s someone who’s come up on Chris’ list of contacts.”

The journalist said “the journey continues.”

The “To Live and Die in LA” team told ABC News there will be new unexpected details revealed in their finale podcast episode, which will be posted on May 17. The podcast is a collaboration between Strauss, Tenderfoot TV and co-produced by Cadence 13.

“In the last week, we just had a huge breakthrough which has nothing to do with the Google data, that has given us answers that we didn’t even think were possible to have,” Strauss said. “We want to let the families know the information first.”

“Even for Adea, you think if anything happens to you, you just want people to know the answer,” he said.