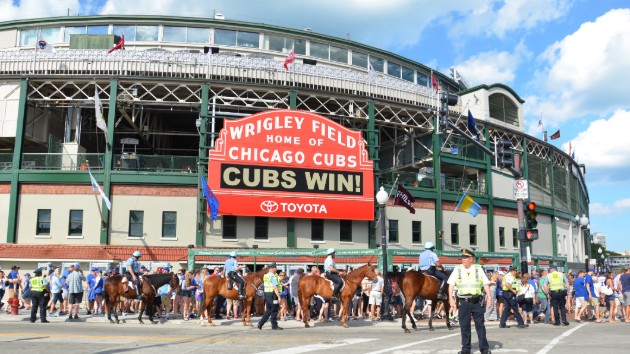 (CHICAGO) — The Chicago Cubs have indefinitely banned a man from Wrigley Field after the individual was caught on camera this week appearing to make an offensive hand gesture, the team announced.The incident took place during the NBC Sports Chicago broadcast of the Cubs’ May 7 game against the Miami Marlins. A man in a Cubs sweatshirt sitting behind the booth where NBC Sports Chicago analyst Doug Glanville was speaking on camera was observed making an upside-down OK gesture with his hand, which is construed by many as a white supremacist symbol. Cubs president of business operations Crane Kenney said in a statement Wednesday that the team reviewed the broadcast and “concluded this individual’s actions violated the Guest Code of Conduct.” Kenney said the team was unable to reach the unnamed individual by phone but sent him a letter stating that he would “not be permitted on the grounds of Wrigley Field or other ticketed areas indefinitely.”

He added that the man could be prosecuted for criminal trespass if he attempts to re-enter Wrigley Field.

Theo Epstein, the Cubs’ president of baseball operations, called the fan’s actions “truly disgusting” and said it “gave [him] shivers to watch” the incident.“I think, appropriately, we’ve made clear how egregious and unacceptable that behavior is, and there’s no place for it in our society, in baseball, and certainly no place at Wrigley Field,” Epstein said.Kevin Cross, senior vice president and general manager for NBC Sports Chicago, said in a statement Wednesday that the fan’s behavior was “reprehensible” and said that it did not “represent the great Cubs fans of our city and those around the country.”Glanville, a former Major League Baseball outfielder who played two stints for the Cubs, said he found out about the gesture after the end of his segment.“I applaud the responsiveness of both the Chicago Cubs organization and NBC Sports in investigating this matter,” Glanville said in a statement. “They have reached out to me and are supportive of my role in the broadcast and continue to have a desire to uphold an inclusive environment at Wrigley Field. They have displayed sensitivity as to how the implications of this would affect me as a person of color.”The Anti-Defamation League (ADL) said that while the hand gesture is usually associated with the word “okay,” members of the website 4chan created a hoax in 2017 that claimed the gesture represented the letters W and P for “white power,” hoping that “the media and liberals would overreact by condemning a common image as white supremacist.”For a time, the symbol was a “popular trolling tactic”, but the ADL says that by 2019 it had also become “a sincere expression of white supremacy.” The Southern Poverty Law Center also noted that “a number of alt-right figures” had been photographed using the symbol before the 4chan hoax.ADL officials said that the gesture can still be used to mean “okay” and for other contexts, including for the “circle game,” where participants attempt to trick others into looking at a similar gesture below one’s waist, and as a symbol for the Three Percenter movement, a pro gun rights militia group.Copyright © 2019, ABC Radio. All rights reserved.

The significance of the Bible Joe Biden is using on Inauguration Day
What happens inside the White House on Inauguration Day
Coronavirus live updates: Biden to sign order requiring masks on federal property
Jake Gyllenhaal hails ‘Donnie Darko’ on its 20th anniversary: “It’s a film that changed my life”
The COVID-19 challenge Biden faces on Day One as president
Trump pardons Bannon, other allies on final night in office