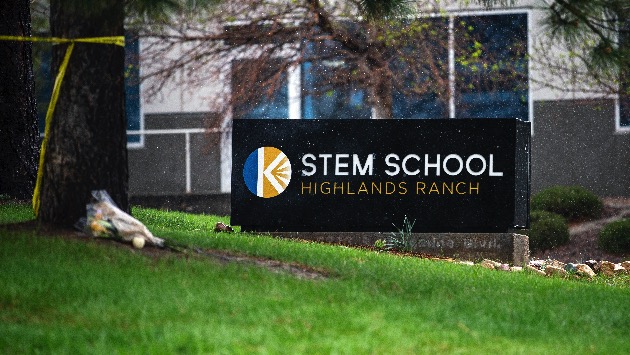 Chet Strange for The Washington Post via Getty Images
Posted on May 10, 2019 by ABC News

(DOUGLAS COUNTY, Colo.) — In the wake of a deadly shooting at a Colorado school this week, ABC News has obtained a letter in which a school official detailed a warning called in to the school board in December, describing a troubled school and concerns of a “repeat of Columbine” on the campus.The internal school letter sent to Penelope “Penny” Eucker, executive director of the Highlands Ranch STEM School, outlines a phone call made by an anonymous woman who said she was the parent of a senior at the school complaining of an “extremely high drug culture” and “student violence due to high pressure environment.”Wendy Vogel, education director of the Douglas County School District Board, received the phone call from the parent on Dec. 17 and made detailed notes of the conversation, according to the letter.The letter, dated Dec. 19, was written by Daniel Winsor, director of Choice Programming for the school district, and addressed to Eucker. A copy of the letter has also been conveyed to the Douglas County Sheriff’s Office.Winsor wrote that the parent cautioned Vogel that a “perfect storm” was brewing at the school and that students were “susceptible to ‘copy-catting"” of Colorado mass shootings, specifically the April 1999 massacre at Columbine High School in Littleton that left 12 students and a teacher dead, and the December 2013 shooting at Arapahoe High School in which a gunman fatally shot one student before killing himself.”The individual expressed concern about a repeat of Columbine and Arapahoe,” according to the letter sent to Eucker. “Many students are suicidal and violent in school. Several students have reported sexual assault in school and that nothing is being done.”The anonymous caller also complained of STEM School students “dealing and using cocaine, meth, marijuana, and LSD, including putting marijuana in drinks.””Several students have gone to rehab,” the caller told Vogel, according to the letter.The caller also recounted an incident in which a student spread feces on the walls at the school, and said that a bomb threat had been made after “kids learned how to build a bomb in school.””The executive director has ignored many complaints and issues that have been brought forward and told this individual, ‘I know we have bullying and special needs students that cause problems, but those students will just leave,"” the letter states.The letter, quoting the anonymous parent, states that the Douglas County Sheriff’s Department had investigated several issues at the school and “they have expressed concerns about safety issues.”Winsor concluded the letter by writing that school district officials were requesting an investigation of the allegations “to determine their legitimacy and to take any remedial action that may be appropriate.”In a statement to ABC News on Thursday, STEM school officials said the allegations were investigated and found to be without merit.”While STEM took the allegations seriously, our investigation revealed no evidence to support any of the allegations raised in the anonymous complaint,” according to the statement.Just before 2 p.m. local time on Tuesday, a pair of gunmen, both allegedly students at the STEM School, opened fire on classmates. An 18-year-old student, identified as Kendrick Castillo, was shot to death when he and two other students charged one of the gunmen inside a classroom in an attempt to stop the shooting, police and witnesses said.Joshua Jones, 18, one of the students who helped tackle alleged gunman Devon Erickson, spoke out about the incident on ABC’s “Good Morning America” on Friday, explaining how Castillo pushed the gunman against a wall before he and student Brendan Bialy grabbed him and threw him to the ground.”When it actually happened, I had to make that decision that nobody should really ever have to make, which was run toward the gunman or run away from him. I chose to run towards him,” said Jones, who suffered two gunshot wounds to his left leg in the encounter.Meanwhile, a court hearing scheduled Friday for Erickson and his alleged accomplice, a juvenile whose name has not been released, was postponed until May 15, while investigators continue to collect evidence in the case and determine a motive for the shooting.The suspects allegedly obtained the handguns used in the attack by breaking into a locked gun cabinet belonging to one of their parents, law enforcement sources told ABC News.The Douglas County Sheriff’s Office is also investigating whether an armed security guard at the school, identified by his lawyer as Marine veteran Shamson Sundara, 29, mistakenly fired at least one shot in the direction of a responding deputy during the chaotic moments of the shooting, and whether a student was injured by his gunfire, law enforcement sources told ABC News.Police and sheriff’s deputies who responded to the shooting did not fire a single shot, sources said.”He took every measure in his power to prevent further harm of students … and I think he’s a hero,” Sundara’s attorney, Robert Burk, told ABC News.Douglas County Sheriff Tony Spurlock said that the actions Sundara took “saved lives.”