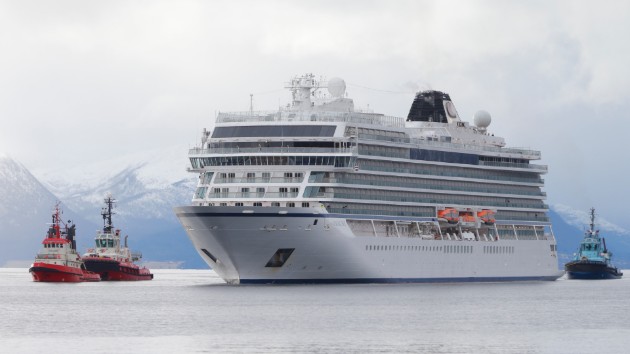 SVEIN OVE EKORNESVAAG/AFP/Getty Images
Posted on May 9, 2019 by ABC News

(NEW YORK) — Viking Cruises is facing a class-action lawsuit from passengers after a harrowing evacuation in high seas in March. A cruise ship operated by the Swiss company suffered an engine failure off the coast of Norway on March 23, leaving more than 1,300 people stranded in rough seas. One passenger posted a video to social media showing the ship, The Viking Sky, tilting back and forth, sending furniture sliding across the room.Twenty people suffered minor injuries during the ordeal, according to Viking Cruises.Norwegian rescue teams in helicopters battled severe winds that day to airlift hundreds of passengers from The Viking Sky. The vessel regained power the following morning and continued on with the remaining passengers and crew to the Norwegian port of Molde, where it docked safely.”We have already begun our internal investigation and our goal is to establish a complete and thorough understanding of what happened,” Viking Cruises, which has its worldwide headquarters in Los Angeles, told ABC News in a statement on March 24. “We welcome the investigations that have been launched, and will fully support them.”A New Jersey couple, Axel and Lauren Freudmann, among those on board, filed a class-action lawsuit in the Los Angeles County Superior Court on Wednesday, individually and on behalf of other passengers, claiming that the cruise line “negligently sailed through notoriously perilous waters into the path of a bomb cyclone,” despite severe weather warnings.According to the lawsuit, weather forecasts warned of “an intense cyclone” as early as March 16 that would threaten the waters off of western Norway on March 23 and 24. The forecasts predicted “extremely severe wind gusts” that could exceed 75 mph per hour, the suit states, yet The Viking Sky set sail from Tromso, Norway, on March 21.”After the vessel left Tromso, Norway, the passengers were not informed of the severity of the weather system the cruise was intending on sailing into,” the lawsuit states. “Passengers had no idea they were being subjected to a historic winter weather event.”The ship’s engines, which were “negligently maintained and/or were not adequately fit for such conditions,” shut down in an area called Hustadvika, “which is known for its notoriously perilous waters dotted with jagged reefs and is considered one of the most dangerous parts of the Norwegian coastline,” according to the lawsuit.The unmoored vessel was “battered and tossed as it was pushed dangerously close towards the hazardous reefs,” while terrified passengers on board were “tossed about like ragdolls,” the suit states.”You really have the worst-case scenario, which is a vessel being without power, in the middle of a storm, subject to the mercy of 30-, 40-, 50-foot waves, hurricane-force winds,” Michael Winkleman, one of the attorneys representing the passengers in the case, told ABC News in an interview that aired Thursday on Good Morning America.The passengers are seeking $10 million in damages from Viking Cruises, according to Winkleman. The cruise line did not immediately respond to ABC News’ request for comment Thursday.The lawsuit claims the passengers were subjected to “hours of terror, unsanitary conditions, lack of ventilation and trauma” as the cruise line attempted to launch a “high-risk evacuation,” airlifting more than 400 people hundreds of feet into a helicopter amid hurricane-force winds.”Passengers, fearing for their lives, held onto whatever they could find while water rushed in through numerous other areas of the vessel,” the suit states. “Furniture was overturned and tossed throughout the vessel; broken glass littered all levels of the vessel; elevators were inoperable; waves crashed through open and/or shattered balcony doors.”Daniel and Shannon Flewelling, a Connecticut couple who joined the class-action lawsuit, said the ordeal took a physical and emotional toll that continues to haunt them.”We were in a situation where moment to moment, we didn’t know if we would make it,” Shannon Flewelling told ABC News in an interview that aired Thursday on GMA.The couple said they both came down with the flu within days of arriving home. Daniel Flewelling suffered complications and has been hospitalized ever since. He is still on a respiration and feeding tube and was recently moved to a hospital for acute care and rehabilitation, his wife said.Doctors now say he could make a full recovery but it could take up to a year.”I’ve spent almost the last four weeks of my life using up all my sick time and my vacation being by his side for weeks, not knowing if he was going to make it or not,” Shannon Flewelling told ABC News. “He is self-employed, but we don’t have that income right now.”

Teachers speak out after voting to teach from home, refusing district’s plan for return
Elliot Page and Emma Portner announce divorce after three years of marriage
Teen speaks out after alerting FBI about father’s alleged role in US Capitol siege
One dead after car strikes multiple pedestrians in Portland, Oregon
Republicans in some battlegrounds left GOP after Capitol riot
LA County Fire Department COVID cases dramatically decrease after 75% get vaccinated