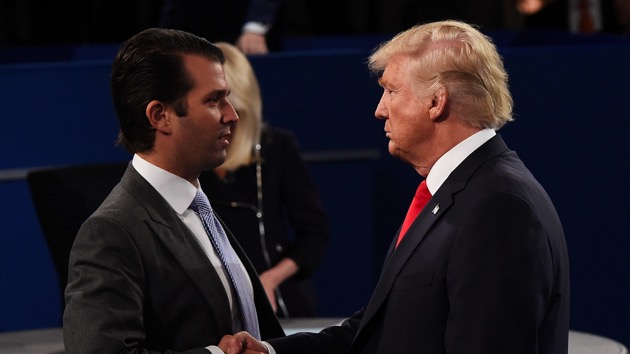 Saul Loeb-Pool/Getty Images
Posted on May 9, 2019 by ABC News

(WASHINGTON) — President Donald Trump said on Thursday that he was “very surprised” by the subpeona for his son, Donald Trump Jr., issued by the GOP-led Senate Intelligence Committee.”My son is a good person,” Trump said, claiming that his son was “totally exonerated” by special counsel Robert Mueller. He called Mueller’s report “the Bible” and that “they say he did nothing wrong.”He also said he was leaving the question of whether Mueller should testify to Congress up to his “great attorney general,” William Barr.The president did not say whether his son should fight the subpoena but he did say that he had previously testified “for a massive amount of time.”Trump Jr. has previously met with three congressional committees, including the Senate Intelligence Committee in December of 2017, with whom he met for more than nine hours as part of their investigation into Russian interference in the 2016 presidential election. He met with the Senate Judiciary Committee in September of 2017 for more than five hours and with the House Intelligence Committee for more than eight hours in December of 2017.It is unclear why the committee wants Trump’s son to return to testify.A source close to Trump Jr. said there was an agreement between the president’s son and the committee that he would only have to come in and testify once as long as he was willing to stay for as long as they’d like, which the source said he did. This is a developing story. Please check back for updates.Copyright © 2019, ABC Radio. All rights reserved.