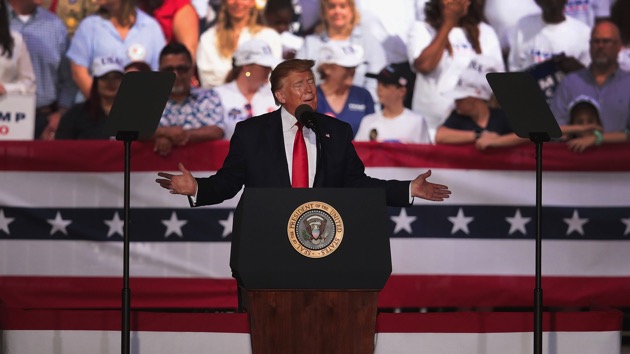 Scott Olson/Getty Images
Posted on May 9, 2019 by ABC News

(PANAMA CITY BEACH, Fla.) — The Trump campaign worked into the night on Wednesday trying to clean up the president’s reaction to a supporter who shouted immigrants crossing into the U.S. should be shot.President Donald Trump was on a riff about border control agents working to prevent migrants from crossing the border while speaking at his Wednesday night rally in Panama City Beach, Fla.“You have hundreds and hundreds of people and you have two or three border security people that are brave and great — And don’t forget, we don’t let them and we can’t let them use weapons. We can’t. Other countries do. We can’t. I would never do that. But how do you stop these people?” the president said.As the president posed that question — a rally attendee in the crowd shouted: “shoot them.”The president paused and instead of condemning the remark he said: “That’s only in the panhandle, can you get away with that statement.”The crowd erupted in cheers and laughter — after another brief pause, Trump repeated: “Only in the panhandle.”In the aftermath of the president’s response to the rally attendee’s inflammatory outburst, the Trump campaign has worked to turn the conversation on Twitter and shift the focus to the president’s statement denouncing the use of weapons by border agents.The campaign’s Deputy Director of Communication and Rapid Response Matt Wolking replied to a number of Twitter users discussing the incident, sending a transcript that excludes part of the president’s reaction to the outburst. He tweeted that Trump said he “would never let” border security use weapons like “other countries do.”Copyright © 2019, ABC Radio. All rights reserved.