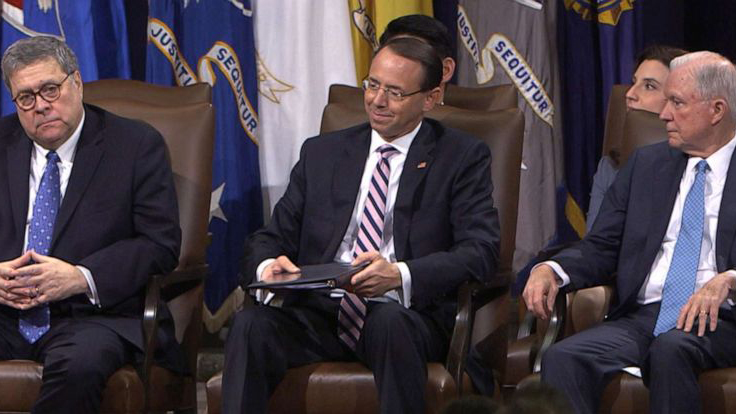 (WASHINGTON) — The nation’s top law enforcement officials hosted a ceremony Thursday honoring Deputy Attorney General Rod Rosenstein, whose planned departure from the Justice Department comes amid renewed scrutiny over his role overseeing the special counsel’s Russia investigation and his relationship with President Donald Trump.After a series of tributes, Rosenstein began his remarks by noting that all Justice Department officials take an oath of loyalty to the Constitution that overrides “loyalty to anyone else.””Seeking the truth requires an open mind,” he said. “There are many people in this room who stood with me on the ramparts of justice.”“He’s faced criticism from all corners but has proven remarkably unflappable,” Attorney General Bill Barr, speaking just before Rosenstein, told a crowd of hundreds gathered in the Justice Department’s Great Hall.At the start of his remarks, Barr cracked a joke about media commentary surrounding Rosenstein’s appearance during a news conference prior to release of the Mueller report, where he stood essentially motionless as Barr sparred with the media.Calling Rosenstein over to stand next to him, Barr said: “There’s been a debate raging for the last few months and I think we have to get it resolved and decided tonight” Which one of us is capable of the most deadpan expression?” he said, referring to the news conference and Barr’s recent testimony to Congress.Rosenstein’s career has spanned three decades across multiple levels of the criminal justice system.But it was only days into his two-year tenure as deputy attorney general that he was thrust into the national spotlight over his role in writing a memo that the White House misleadingly used to justify President Trump’s decision to fire then-FBI Director James Comey.Comey’s firing followed by the recusal of former attorney general Jeff Sessions in the Russia investigation prompted Rosenstein’s appointment of Robert Mueller as special counsel, a decision that would go on to largely define the remainder of his time as the nation’s number two law enforcement official. Sessions was on hand for the tribute as were White House counselor Kellyanne Conway, White House counsel Emmet Flood and former White House counsel Don McGahn.Lawmakers on both sides of the aisle have at various points through the investigation have cast Rosenstein as a villain.House Republicans threatened Rosenstein with impeachment over his refusals to hand over classified documents relating to the origin of the investigation into Trump’s campaign. A New York Times story from from late 2018 that Rosenstein once suggested the possibility of surreptitiously recording President Trump and enlisting Cabinet members to remove him from office by using the 25th Amendment further fueled calls from Republicans for Trump to oust him.“I never pursued or authorized recording the President and any suggestion that I have ever advocated for the removal of the President is absolutely false,” Rosenstein said in response to the story at the time.In contrast, Democrats and former law enforcement officials have accused Rosenstein of not standing up enough to the president’s frequent attacks against the DOJ and FBI, along with his decision to praise the president in his resignation letter.”I am grateful to you for the opportunity to serve; for the courtesy and humor you often display in our personal conversations and for the goals you set in your inaugural address,” Rosenstein wrote.Just months earlier, Trump defended his decision to tweet out a picture showing Rosenstein behind bars along with a host of other political figures and other law enforcement officials.”Accomplished people lacking inner strength can’t resist the compromises necessary to survive Mr. Trump and that adds up to something they will never recover from,” Comey wrote in a recent New York Times op-ed in reference to Rosenstein and Barr. “Of course, to stay, you must be seen as on his team, so you make further compromises. You use his language, praise his leadership, tout his commitment to values.”Democrats have also recently raised questions over Rosenstein’s decision not to recuse from the obstruction case against President Trump despite his role as a key witness to several of the episodes cited by Mueller’s investigators.In one contentious exchange during Attorney General Bill Barr’s testimony to the Senate last week, Sen. Kamala Harris, D-Calif., pressed whether Rosenstein had been cleared by DOJ ethics officials to participate in the decision. Barr said Rosenstein had been cleared at the start of the investigation and dismissed questions that his role as a witness should mean he should have had his recusal re-evaluation.It’s unclear whether lawmakers plan to call Rosenstein to personally testify about the investigation following his official exit from the department on Saturday.Jeffrey Rosen, a former lawyer who served as Deputy Secretary of Transportation, was nominated by President Trump to replace Rosenstein and is expected to face a confirmation vote before the Senate sometime next week.

Intel report warns officials are ‘very likely’ to be cyberattack targets amid remote transition
Latinos in LA area disproportionately affected by COVID
Biden directive combats racism against Asian Americans amid COVID-19 pandemic
DOJ has identified 400 suspects, charged 135 in Capitol riot
John David Washington talks following in the footsteps of his Oscar-winning dad, Denzel Washington
What to know about the link between mental health and heart disease