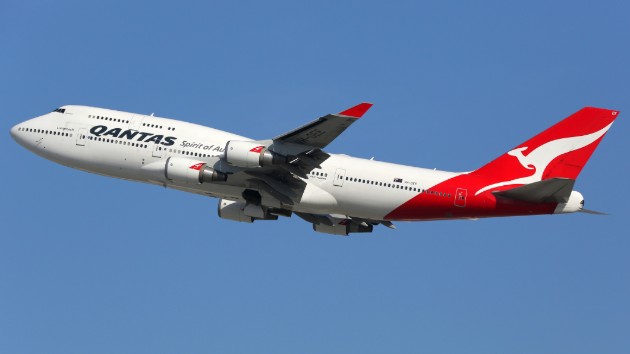 (SYDNEY) — Your coffee’s mini creamer capsules and mini Vegemite pods may soon be a blast from the past — if you fly Qantas.The Australian airline flew the first-ever “zero waste” flight from Sydney to Adelaide Wednesday morning. The inaugural flight took place amid a growing worldwide movement to ban single use plastics, which are made from fossil fuels, do not biodegrade and constitute most ocean debris.“In the process of carrying over 50 million people every year, Qantas and [Qantas’ low-cost airline] Jetstar currently produce an amount of waste equivalent to 80 fully-laden Boeing 747 jumbo jets,” Qantas Domestic CEO Andrew David said just before the flight. “This flight is about testing our products, refining the waste process and getting feedback from our customers.”All inflight products on board the test flight would be composted, reused or recycled, officials with the Australian airline said. Wednesday’s test aligns with the company’s plan to cut 100 million single-use plastics by 2021 and reduce the airline’s waste by 75 percent by 2022.The typical cross-country flight from Sydney to Adelaide, which is a flying distance of about 722 miles and takes about two hours, generates about 75 pounds of waste, David said. That adds up to 150 tons of waste annually.On Wednesday’s flight, about 1,000 single-use plastic items were substituted with sustainable alternatives, such as sugar cane containers or crop starch cutlery. And some were removed altogether, including “individually-packaged servings of milk and Vegemite,” Qantas said in a statement.After the flight a Qantas employee tweeted a photo that he said compared one solitary bag of trash that would be repurposed or recycled to several large bags of waste that the flight typically generates.Many cities across the U.S. have banned plastic bags, straws and single-use plastics in general. California is currently weighing a statewide ban. Last October, the European Parliament voted in a landslide to ban single-use plastics in by 2021.Qantas’ move toward zero-waste flights was “noteworthy,” said Eric A. Goldstein, the Natural Resources Defense Council’s expert on solid waste reform.”While air travel still burns a lot of fossil fuels, this will have a positive impact in its own right, and can also lead other airlines to follow suit,” Goldstein told ABC News. “Other airlines have been seeking to cut the amount of waste they generate, or do inflight recycling. This aiming for a zero-waste flight takes those efforts to the next level.”Qantas officials also said the carbon emissions from Wednesday’s zero-waste flight were offset 100 percent by offset credits. From mid-2019, Qantas customers in the airline’s loyalty program will earn 10 Qantas Points for every dollar spent offsetting their travel from Australia, company representatives said.Last year, Qantas operated the first biofuel flight between Australia and the U.S. using fuel made from mustard seed. Copyright © 2019, ABC Radio. All rights reserved.