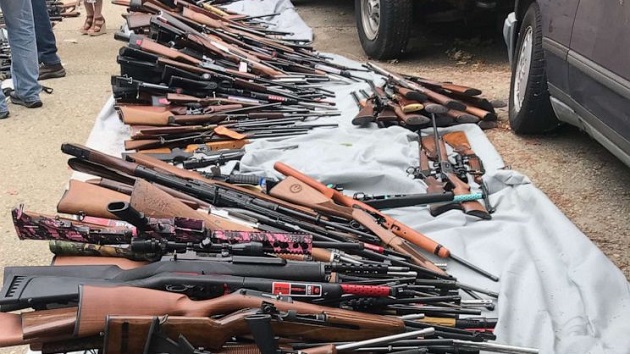 Los Angeles Police Department
Posted on May 9, 2019 by ABC News

(LOS ANGELES) — A man in Los Angeles’ posh Holmby Hills neighborhood was hiding a stash of weapons large enough to outfit an army. The Los Angeles Police Department busted Girard Damien Saenz, 57, with as many as 1,000 weapons piled up in his home. Authorities also found massive stockpiles of ammunition. Saenz, who was living in the home alone, was booked for unlawful transportation and giving, lending or selling assault weapons. Additional charges may be added later, including federal charges, authorities said. He is being held on $50,000 bond.”I had never seen so many weapons in my career of 31 years,” said LAPD Lt. Chris Ramirez. “That’s such a big arsenal in a residence like this, in this type of neighborhood. It’s astounding.”Holmby Hills is bordered by the Beverly Hills and Bel Air neighborhoods and is home to the late Aaron Spelling’s massive $85 million mansion and the Playboy Mansion.Officials removed all of the guns — hundreds of rifles, semiautomatics, handguns and even antique Civil War-era guns — and piled them up outside the man’s home. Officials spent the entire afternoon cataloging the humongous stash of firearms.Ramirez called the cache of weapons “beyond comprehension” in a press conference Wednesday. He said the large house was cluttered with piles of guns and ammunition spread throughout different rooms.Saenz apparently was licensed to own weapons — and there is no prohibition on the number of guns a person can own — but the person was selling the guns illegally, according to police.The Bureau of Alcohol, Tobacco, Firearms and Explosives (ATF) assisted in the operation.

Haitian migrants cleared from camp at Texas border but controversy continues
A special Bond: Daniel Craig named honorary commander in the Royal Navy
A century after arson decimated its Chinatown, San Jose to apologize for past racism and injustices
Willie Garson died from pancreatic cancer, his obituary reveals
Billy Bob Thornton and Tania Raymonde on bringing ‘Goliath’ to a close with new fourth season
‘The Killing of Kenneth Chamberlain’ shines a light on racial injustice