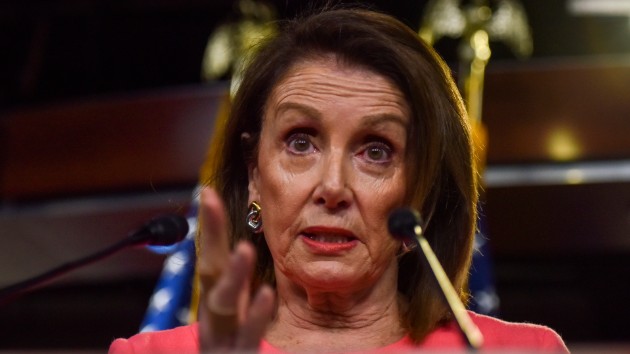 Jahi Chikwendiu/The Washington Post via Getty Images
Posted on May 9, 2019 by ABC News

(WASHINGTON) — House Speaker Nancy Pelosi implied Wednesday that President Donald Trump is building his own case for impeachment by refusing to comply with lawmakers’ requests for White House testimony and documents. “The point is that every single day, whether it’s obstruction, obstruction, obstruction — obstruction of having people come to the table with facts, ignoring subpoenas . . . every single day, the president is making a case — he’s becoming self-impeachable, in terms of some of the things that he is doing,” Pelosi, D-Calif., said in a one-on-one Washington Post Live interview. Her comments came amid Trump’s decision to assert executive privilege over special counsel Robert Mueller’s findings, escalating the battle between House Democrats and the White House over access to witnesses and information. Pelosi said that lawmakers were in the process of protecting sources and methods in order to release the report before the White House stepped in.”They were in the course of accommodations,” Pelosi said. “And boom, the administration just said ‘We’re going to make this executive privilege."”Pelosi has consistently cautioned Democrats not to call for Trump’s impeachment, previously stating that Trump isn’t “worth it” and that it would be too divisive for the country. On Tuesday, she suggested the president was “goading” democrats into initiating impeachment proceedings in order to “solidify his base.””Trump is goading us to impeach him. That’s what he’s doing, every single day, he’s just like taunting taunting, because he knows that it would be very divisive in the country,” Pelosi said Tuesday at Cornell University’s Institute of Politics and Global Affairs in New York City. “But he doesn’t really care, he just wants to solidify his base.”The California Democrat mentioned the article of impeachment used against President Richard Nixon on Tuesday and Wednesday. She pointed out Tuesday that the third article used against Nixon was for his failure to comply with congressional subpoenas. On Wednesday, she clarified that she would not use that approach against Trump.Pelosi also reiterated her belief early Wednesday that Attorney General William Barr should be held in contempt. Later, the House Judiciary Committee voted to advance a resolution to hold Barr in contempt of Congress for not complying with a subpoena for special counsel Robert Mueller’s unredacted report. The resolution could receive a vote on the House floor within weeks.When asked if impeachment is off the table for Barr, Pelosi responded, “Well nothing is ever off the table.” Copyright © 2019, ABC Radio. All rights reserved.