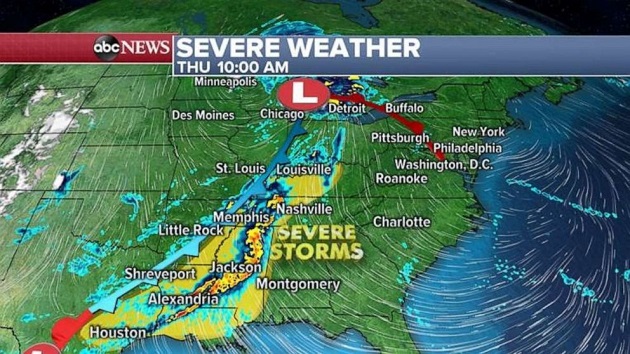 (NEW YORK) — A powerful storm moving through the Plains and Deep South brought a second day of severe weather on Wednesday. There were four more reported tornadoes on Wednesday, bringing the count from this outbreak to 20 in four states — Louisiana, Texas, Oklahoma and Kansas.The threat for severe weather will continue across parts of the Mississippi River Valley Thursday morning, and some of the strong storms will reach the East Coast by Friday. However, a multi-day flash flood threat is also about to get underway in parts of the hard-hit South, including Texas and Louisiana.The radar is showing a large storm system in the central U.S. on Thursday morning, with colder air bringing some snow in parts of Minnesota. Duluth had received 9.1 inches through 4:15 a.m. — and it was still snowing.However, in the Deep South, trailing thunderstorms are causing major flash flooding in parts of the region — especially in Shreveport, Louisiana. Radar estimates of 4 to 5 inches of rain is causing significant flash flooding in the region as storms continue to fire up during the morning. Rainfall rates over 2 inches per hour could mean rainfall totals over 6 inches through the morning in parts of the region.The storm system will drag severe storms across the Mississippi River Valley through the day Thursday, with damaging winds, large hail and brief tornadoes possible from Louisiana to Kentucky.Then, another disturbance will bring a round of severe weather to southeast Texas and Louisiana at night, with damaging winds, large hail and brief tornadoes possible.However, the biggest concern for this next disturbance is torrential rain. Rainfall rates in parts of southeast Texas could exceed 2 inches per hour Thursday evening, which could cause flash flooding on saturated grounds.On Friday, strong storms with locally gusty winds will move into the Appalachians and impact parts of the Northeast. At this time, the severe threat looks to be marginal, but the forecast could change as the system evolves Thursday.Meanwhile, yet another blast of heavy rain will move into southeast Texas and southern Louisiana Friday and bring more rainfall rates that could exceed 2 inches per hour.Locally, 6 to 10 inches of rain is forecast through the end of the week and into the weekend across parts of southeast Texas and Louisiana. Given that some of this area — especially near Houston — already saw 6 to 10 inches of rain this week, there is growing concern for major flash flooding through the end of the week.