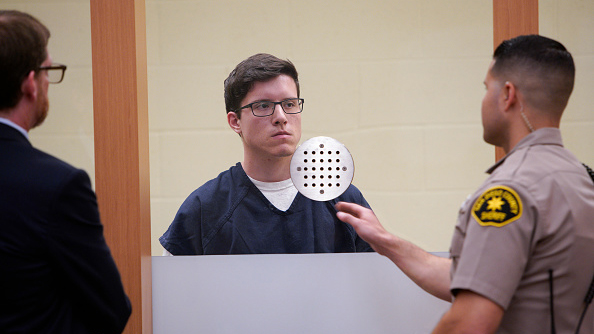 Nelvin C. Cepeda-Pool/Getty Images
Posted on May 9, 2019 by ABC News

(SAN DIEGO) — John Earnest, the 19-year-old accused of attacking worshipers at a Southern California synagogue on April 27, will face federal civil rights and hate crime charges that could make him eligible for the death penalty.Federal prosecutors made the announcement Thursday in San Diego, 12 days after officials say Earnest barged into the Chabad of Poway synagogue during Passover services and opened fire with an AR-15-type rifle.Lori Kaye-Gilbert, 60, was killed in the attack and three others were injured. Rabbi Yisroel Goldstein was shot in both hands, 34-year-old Almog Peretz was shot in the leg, and Peretz’s 8-year-old niece Noya Dahan, was struck in her face and leg, police said.After the gunman stopped firing, possibly because his gun jammed, police said congregants rushed him and he fled the building and drove off. He was stopped minutes later and arrested without incident by San Diego police.Earnest will face 109 federal counts, including 54 counts of obstructing the free exercise of religious beliefs resulting in death or bodily injury — one count for each person who was in the Poway synagogue at the time of the attack, said Robert Brewer, U.S. Attorney for Southern District of California, who announced the charges.Each count is eligible for the death penalty, Brewer said.”Our actions today are inspired by our desire to achieve justice for all of the victims and their families,” Brewer said.Earnest is also accused of setting fire to the Dar-ul-Arqam mosque in Escondido on March 23, for which he also faces one count of damage to religious property.Earnest is already facing state charges of murder, attempted murder and arson, filed last week by the San Diego District Attorney’s Office. While those charges could make Earnest eligible for the death penalty under California law, prosecutors have not yet made a decision on what punishment they will seek.

Arrest made in Indianapolis mass shooting that left five people, including pregnant mother, dead
Girl, 15, stabbed to death in grocery store during fight with four younger girls
.22 pistol stolen near Luthersburg, later returned
Son damages father’s two TVs and a DVR in Clearfield County, no charges filed
Capitol rioter who allegedly tweeted he wanted to ‘assassinate’ Alexandria Ocasio-Cortez faces 5 charges
Fryburg man says someone else got $2,401 of his unemployment checks