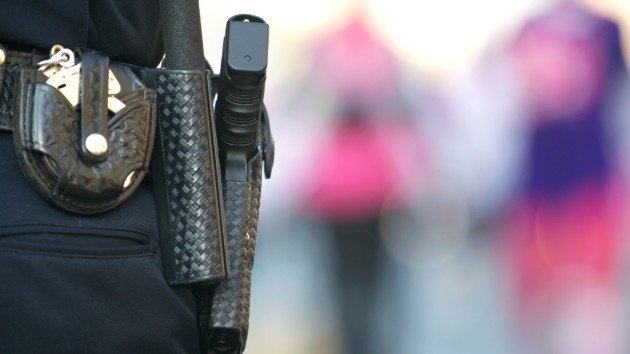 (OKLAHOMA CITY) — The lawyer for the family of a 14-year-old who was shot by police has released body camera video showing an officer in Oklahoma opening fire on the teen, who police believed to be armed, less than a second after yelling “Show me your hands.”On March 10, around 5:43 p.m., the Oklahoma City Police Department got a call reporting that three to four people were breaking into a home and that at least two were armed with guns, the department said in a news release posted on March 11 on Facebook. When officers arrived, they heard possible gunshots.In the body camera video, which is 2 minutes 43 seconds long, the officer is outside of a residence and can be heard saying: “Hey, police department. Come on out!”A noise, which the department described as “possible gunshots,” can be heard in the distance as the officer nears the house.With his gun raised in his right hand and a radio in his left, the officer can be heard saying: “I think it’s a cap gun. But they are shooting something off.”As he reaches an opening in a fence, the officer says: “Show me your hands. Drop it!”He then fires his gun. The person he’s shooting at is not visible in the video.”Drop the gun!” he says. “Shots fired. Shots fired. Black male with a gray hoodie had the gun.”Moments later, the officer stands over a suspect, identified as 14-year-old Lorenzo Clerkley Jr. by the family’s lawyer, who is on his stomach and handcuffed behind his back.”Where are you hit?” the officer asks.”My side. My right side,” Clerkley tells the officer before starting to cry.”You’re OK,” the officer says.The officer locates a bullet hole on the teen’s side and later another one in the upper leg.The police department identified the officer who shot the teenager as Sgt. Kyle Holcomb.Holcomb, who has more than nine years of service, saw the teen in the backyard of the home with a gun in his hand and told him to drop the weapon, police said.”The suspect did not comply with the orders and Sergeant Holcomb discharged his firearm and struck the suspect,” the release said.Police, who later said they recovered a BB gun at the scene that looked real, maintained that Holcomb sensed potential danger and was defending himself.The family of the teen, however, said that while he and friends had been playing with BB guns at an abandoned house that day, he was not armed at the time of the shooting.”Sergeant Holcomb did not give Lorenzo time to comply with his commands, and did not have probable cause to believe that Lorenzo posed a threat of serious physical harm to anyone when he began shooting. … Further, Holcomb had the cover and protection of the wooden fence when he encountered Lorenzo, who was a safe distance away. And there is no evidence that Lorenzo verbally threatened anyone, physically threatened anyone, attempted to evade arrest or otherwise resisted arrest. There was simply no justification for Sergeant Holcomb to shoot this young man,” the family said in a statement released by its lawyer Daniel Smolen. “We now seek all of the answers. We seek full transparency. We seek justice for Lorenzo.”When first responders arrived to the scene, Clerkley was taken to a hospital for “non life-threatening” injuries, the release said. No officers were hurt and Holcomb was placed on paid administrative leave.He was not charged and is back on the force.The family of the teenager called the shooting an example of police misconduct.A police internal investigation is still underway.