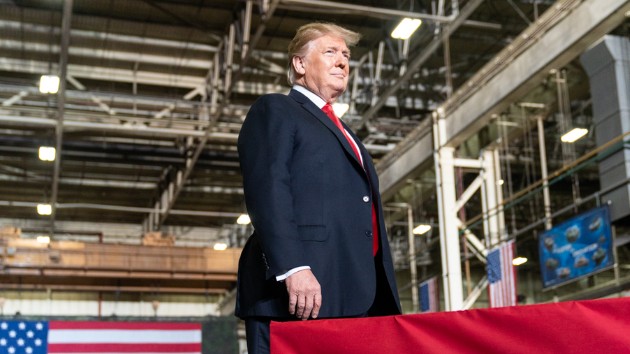 Official White House Photo by Shealah Craighead
Posted on May 8, 2019 by ABC News

(PANAMA CITY, Fla.) — President Donald Trump will speak to his supporters at a political rally on Wednesday in Panama City, Florida, a community still fighting for disaster aid several months after Hurricane Michael, a Category 5 storm, ravaged the area.For some in the region, it’s not about the community’s chance to see the president — it’s about the president’s chance to see the community. “We’re just encouraged that [Trump] is going to spend his time back in this area. And maybe he can see progress of where we are but how much more we need to have from Congress,” Panama City Manager Mark McQueen told ABC News.The president’s visit falls on National Hurricane Preparedness Week, launched by the White House with the hope of encouraging Americans living in hurricane-prone areas “to take the measures necessary to safeguard their families, homes, and businesses.””My Administration is continuing its efforts to enhance storm tracking and intensity predictions to help save lives and livelihoods by giving communities adequate time to prepare. We are committed to ensuring that the United States will produce the best weather forecasting model in the world,” Trump said in a statement released by the White House.The Trump administration notes its efforts to prioritize and invest in mitigation actions, but Panama City is still working to clean up after Hurricane Michael ripped through the Florida Panhandle in October and, like many other communities, still need help with recovery efforts, officials said.”If you take Hurricane Irma that went through basically 15 counties of Florida, there was 2.3 million cubic yards of debris,” Panama City Mayor Greg Brudnick said. “In Panama City alone, we have picked up nearly 4 million cubic yards so far, in our little 36-mile footprint.”The storm’s 155-mph winds ripped through parts of the Panhandle, destroying homes, leaving a trail of destruction in its wake. Dozens were killed.Brudnick, who described the damage as “catastrophic,” had to chisel his way out of his own home, using handsaws and chainsaws to cut through debris. When he finally emerged, he soon saw the scope of the damage.”To get out to the road and to be able to traverse — it was unbelievable the amount of debris that that we could see. And until you start picking it up, you really don’t understand or know the devastation,” Brudnick said.In Bay County alone, 31 million cubic yards of debris have been picked up — enough to fill 12 million standard-sized truck beds, according to city aides. But the cost to pick up the debris exceeds the city’s annual budget. Panama City estimates cleanup efforts could reach $150 million, but the average annual budget for the city is just $90 million.”When we say we’re looking for help from the federal government, the reason is that all of these expenses need to be paid for when billed. It’s not like we’re looking for money to rebuild buildings that got devastated. This is just to clean up so we can find where the buildings used to be, to start working,” Brudnick said.Much of the region’s focus is on housing and education. As residents scurry to find a stable place to call home, the U.S. Postal Service has reported more than 14,000 change-of-address filings. There are also more than 5,500 homeless children with no permanent address.City officials remain hopeful as they look to emerge bigger, better and stronger from a storm that wiped so much life out of their community.”I know many other cities have gone 10 to 15 years in terms of recovery — we’re going to push the envelope. In three to five years, we want to be well on our way to recovery,” McQueen said.But to get there, he believes it will take a whole government approach and investment into affected communities.”The federal government needs to come to bear. The state, the county and the city need to apply resources, as well as private capital and philanthropic revenues that can help to change the outcome of Panama City,” McQueen continued.For Brudnick and McQueen, the president’s trip comes fresh off their own visit to the nation’s capital, where they made an in-person plea to lawmakers to take action and move forward with disaster relief aid. They joined a chorus of other elected officials putting pressure on Congress for more disaster relief aid after their communities were severely damaged in a variety of natural disasters.”We met with a number of members of Congress, we met with a number of agencies. And the assessment is that we feel very optimistic that Congress will take up a supplemental that will help not just Panama City, but all of these disasters that took place in the United States,” McQueen said.Aid, however, has reached a series of roadblocks. Initially stalled by the longest government shutdown in history, it is now deadlocked in Congress. Brudnick, McQueen and other officials left Washington empty handed.Trump visited the area shortly after Hurricane Michael touched down and toured ravaged communities.”To see this, personally, is very, very tough,” the president said during his October visit.His upcoming visit, attracting national attention, is eagerly anticipated by a community that has at times felt forgotten since October.”We’re very pleased with President Trump’s response to coming to Panama City, that he was here very shortly after the storm and survey the damage,” McQueen said. “And we’re very encouraged by that, that shows that we’re not forgotten, nor ignored.”Copyright © 2019, ABC Radio. All rights reserved.