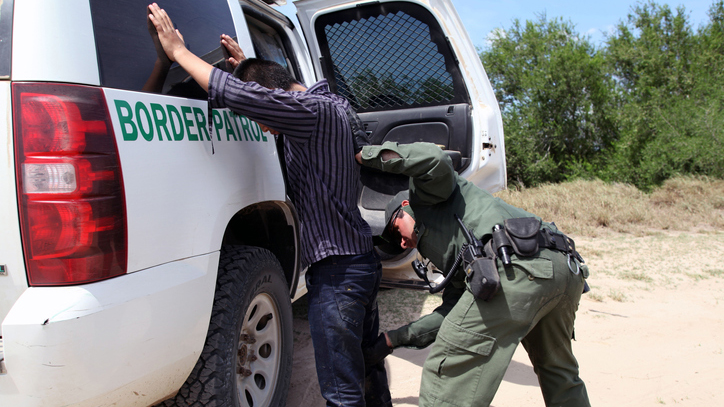 vichinterlang/iStock
Posted on May 8, 2019 by ABC News

(WASHINGTON) — U.S. authorities stopped more than 109,000 undocumented migrants along the U.S.-Mexico border last month in a wave of unauthorized crossings not seen in over a decade, officials said on Wednesday.The 109,000 figure for April represents people apprehended for trying to cross between ports, as well as some who present themselves legally at ports of entry in a bid to claim asylum. Officials have said if such levels continue, the U.S. will be on track to handle some 1 million undocumented migrants this budget year – almost double of last year’s number.“The April apprehension levels are again record setting, and they cause dire concerns for us,” one Homeland Security official said.The number of people apprehended at the southern border in just over the past seven months now surpasses last year’s total, as well as every annual total since 2009, according to newly released U.S. Customs and Border protection data.The bulk of the migrant influx comes from more than 58,000 families and more than 8,800 unaccompanied kids arrested on suspicion of crossing illegally. As a result, Homeland Security officials said agents have been forced to expedite the release of about 32,000 families in recent months.The growing trend continues to challenge President Donald Trump as his administration pursues some of the most hard-line U.S. immigration policies in recent history.The White House has made multiple attempts to deter migrants from seeking refuge in the U.S. In November 2018, the administration announced a new policy to bar migrants from filing an asylum application if they crossed the border between ports of entry. The move was blocked by a San Francisco judge just 10 days after the policy was announced.The Trump administration now is updating how U.S. officials interview asylum seekers. According to internal documents and emails obtained The Washington Post, the new guidelines direct officers to take a more skeptical and confrontational approach to migrants.U.S. Customs and Immigration services confirmed to ABC that it is updating its asylum officer training.“As part of this periodic update, we have reiterated to asylum officers long-standing policies that help determine an individual’s credibility during the credible fear interview,” USCIS Spokeswoman Jessica Collins said in a statement.Exceptionally high levels of migration are also expected for the month of May, an official said, with Border Patrol apprehending more than 33,000 people in the past 10 days. Last month, CBP constructed two tent cities near the border to hold migrants in Texas. The agency is expecting to open another in Arizona, an official said Tuesday.