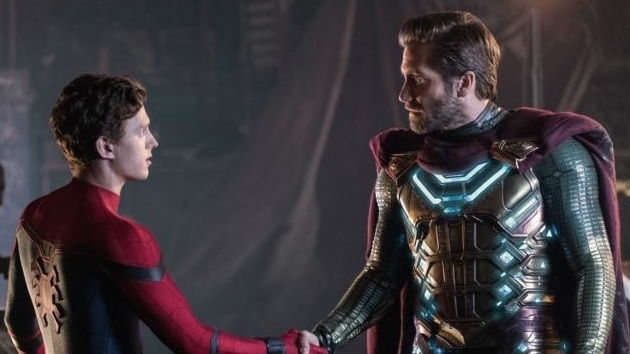 (LOS ANGELES) — (“AVENGERS: ENDGAME” SPOILERS AHEAD) Sony’s Entertainment’s new Spider-Man: Far from Home trailer, released on Monday, generated 135.2 million views in 24 hours — the most over a 24-hour period in the studio’s history, according to Deadline.

It should be noted that the all-time trailer champ title belongs to Marvel Studios’ Avengers: Endgame, which attracted 289 million in 24 hours. Its predecessor, Avengers: Infinity War comes in second, with 236 million.

Still, Spidey’s views are pretty impressive, since a second trailer for a film is usually greeted with less enthusiasm then the first. Then again, Monday’s trailer offered us the first glimpse of a Marvel character in the aftermath of Avengers: Endgame, and contains spoilers about same.

The new Spider-Man: Far from Home trailer tops the 130 million views logged by the film’s teaser-trailer during its first 24 hours back in January. Third place belongs to the franchise’s previous film, 2017’s Spider-Man: Homecoming, with 116 million hits.

The Spider-Man: Far from Home  trailer, shows a distraught Peter Parker/Spider-Man, again played by Tom Holland, still dealing with the aftermath of the Endgame’s epic battle against Thanos, in which his mentor Tony Stark — a.k.a. Iron Man — heroically sacrificed his life to save the world.