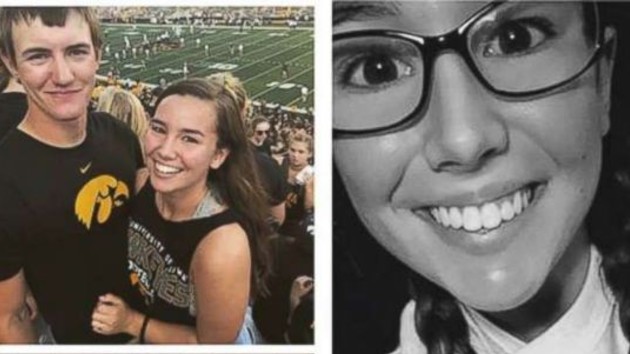 Poweshiek County Sheriffs Office
Posted on May 8, 2019 by ABC News

(BROOKLYN, Iowa) — As her family celebrates her daughter’s birthday, Laura Calderwood wants people to remember Mollie Tibbetts by donating $21 to Mollie’s Movement, a fundraiser for restoration of the Brooklyn Opera House set up in honor of the late University of Iowa student.Calderwood said she hopes to mobilize the same community that participated in a month-long search for Tibbetts last year when she vanished in July after going out for a jog in her hometown of Brooklyn, Iowa. She was found stabbed to death in a field about a month later after a nationwide search.”We are asking people to donate $21 in honor of Mollie and we thought that was a reasonable amount that anybody could participate in,” Calderwood told ABC News’ Good Morning America in an interview that aired Wednesday, which would have been her daughter’s 21st birthday.The fundraiser was launched to remember her daughter’s love of theater.”Mollie was very gregarious, welcoming, outgoing — empathetic. She loved running. She loved theater arts. She loved singing in the shower,” Calderwood said. “Mollie was very dedicated to theater arts — she was in plays.”Calderwood said she’s had a difficult time accepting her daughter’s death, but she tries her best not to feel anger toward Christian Rivera, the accused murderer who led police to Tibbetts’ body in August.”It was indescribable and it took a higher power to get me through it, it really did … but we got through it,” she said. “I don’t wanna feel anger. I don’t spend a lot of time thinking about it at all.””I mean, people have asked me, you know, ‘Will you ever forgive him?’ And I said, ‘I haven’t — I’ve gone nowhere near that,"” she added.Calderwood has stayed largely silent in the wake of her daughter’s murder, but she said she chose to come forward in an effort to spread more kindness.”I just hope that we’ve set a good example. And with all the kindness that was given to my family and to the community — keep that in mind and pay that forward,” Calderwood said. “I mean, I received the kindness and now I’m trying to pay that forward.” Copyright © 2019, ABC Radio. All rights reserved.