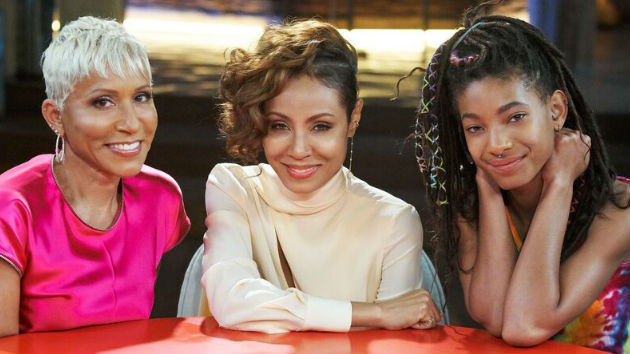 (LOS ANGELES) — In her latest episode of Red Table Talk, Jada Pinkett Smith is opening up about how she handled her jealous feelings toward other women who worked with her husband, Will Smith.

Pinkett Smith, who’s been married to Will since 1997, says at the start of their relationship she felt insecure when Smith’s fans and co-stars seemed to go overboard with him.

“There was only, like, one or two times where I might have gotten a little hostile where I felt like people stepped over a boundary and they were disrespectful,” Pinkett Smith said to her daughter, Willow Smith, mother Adrienne Banfield Norris and their episode guest, Ayesha Curry during the show.

She continued, “I know who I am. And, more importantly, he knows who I am, right?”

“So the responsibility is more on the men,” Norris added.

Pinkett Smith agreed, adding, “I think also you need to have an internal space of confidence. At the end of the day, that’s part of it.”

Chrissy Teigen says sobriety is “a different world for me”
Tom Holland admits he broke his laptop when he found out he was the new Spider-Man
Coronavirus live updates: Fauci on how Biden’s COVID plan will affect vaccine rollout
Carole Baskin relieved Joe Exotic did not receive presidential pardon: “He belongs in a cage”
Cities, states face ‘a lot of uncertainty’ as they exhaust vaccine allotments
Coronavirus live updates: Fauci announces US will remain member of WHO