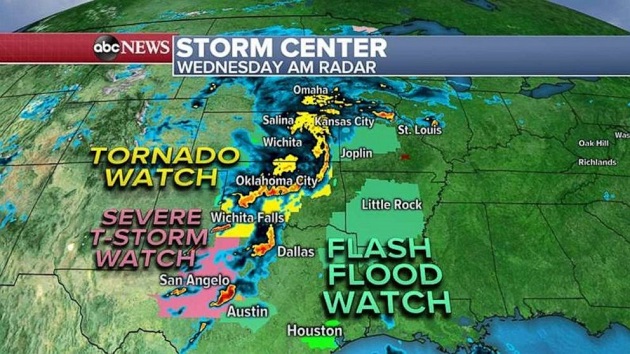 (NEW YORK) — A powerful storm has brought several days of severe weather across parts of the central U.S., including flooding rains in eastern Texas. Since the outbreak began on Tuesday, there have been 13 reported tornadoes in two different states (11 in Texas and two in Oklahoma). There were several tornado warnings early Wednesday along an intense line of storms spanning central Oklahoma and Texas, including reports of a large tornado in Kiowa County, Oklahoma, with possible damage. A flash flood emergency was issued early Wednesday morning for parts of central Kansas due to rainfall totals in excess of 4 inches. Moisture flowing in from the Gulf pounded Houston on Tuesday with rainfall rates up to 3 inches per hour and 10.19 inches of rain in Fort Bend County, a suburb southeast of the city.The radar on Wednesday morning was showing several clusters of intense thunderstorms stretching across parts of Kansas, Oklahoma and Texas. A few cells separate from the main line of storms have popped up across parts of Texas as well. Damaging winds, brief tornadoes and hail remain possible, as well as rainfall rates of 2 inches per hour or higher in some spots.A tornado watch is still in effect for parts of southern Kansas, most of Oklahoma and northern Texas, but it will likely be allowed to expire early Wednesday morning. A severe thunderstorm watch will remain in effect for parts of central Texas until 7 a.m. local time. Flash flood watches are being issued ahead of the line of storms as well.An intense line of storms is expected to move through major cities in Texas — Dallas, Waco and Austin — later Wednesday, as well as bringing very heavy rainfall to part of the Arkansas-Louisiana-Texas region.The storm system will bring severe storms to parts of Louisiana, Arkansas, Mississippi and Tennessee Wednesday night.There is a large slight-risk region from San Antonio to Peoria, Illinois, where damaging winds, large hail and brief tornadoes are possible. However, of particular concern, is an enhanced risk region that includes Austin and Waco, Texas; Shreveport, Louisiana; and Little Rock, Arkansas. Winds and large hail in the region could be destructive and a few tornadoes are possible.There is a slight-risk region on Thursday for the lower Mississippi River Valley region, and that is mainly for storm activity that will be ongoing through the morning hours. This region includes Memphis, Tennessee; Jackson, Mississippi; and Alexandria, Louisiana.On Thursday, this very large system will bring unsettled weather, including thunderstorms, to parts of the Ohio and Tennessee valleys, as well as parts of the Gulf states. Heavy rain and strong thunderstorms remain a concern.Locally, over 8 inches of rain are still expected to fall in parts of Texas, Louisiana and Arkansas. This could cause significant and life-threatening flash flooding. Heavy rain, with locally torrential downpours, are possible in the already hard-hit Houston metro area through the next several days.Behind this storm, colder air will change precipitation to snow in parts of the Upper Midwest, and into the Rocky Mountains near Denver.

‘Tiger King’ star Joe Exotic reportedly looking to Joe Biden for pardon
‘A Quiet Place Part II’ delayed again by COVID-19
Fit Finance: How to create a one-year spending plan and rethink your budget
Coronavirus live updates: Fauci describes what it was like working with Trump
Girl, 15, stabbed to death in grocery store during fight with four younger girls
Nashville attorney’s license suspended after posting advice on getting away with murder