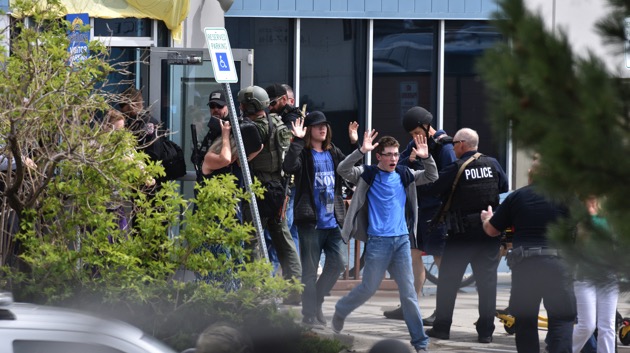 Tom Cooper/Getty Images
Posted on May 8, 2019 by ABC News

(DOUGLAS COUNTY, Colo.) — The deadly school shooting in Colorado Tuesday brought back familiar feelings of grief and fear for local parents, including the district attorney who will be handling the case.”If you had suggested to anybody behind me or in this room that within 20 years in 20 miles we would have dealt with Columbine, the Aurora theater, Arapahoe High School, the shooting of Zack Parrish and four other deputies, we’d have thought you mad, and yet here we are again,” District Attorney George Brauchler said at a news conference Wednesday.His comments come as the community in Douglas County, Colo., grapple with the aftermath of the shooting at the STEM School in Highlands Ranch, which left one victim dead and eight others injured. Two suspects are in custody.”There are those that won’t be classified as victims [who are] feeling it right now,” he said, specifically talking about mothers and fathers who he said will be having serious conversations about whether or not to send their kids to school.”My kids are going to go to school today and I recommend everyone else send their kids to school too,” Brauchler said.”These are aberrant acts,” he went on. “The problem is when you get three or four or five of them in a 20 mile [area]” people start to think they aren’t as uncommon as they seem, he noted.”This is not who we are and my concern is … this becomes how people view us,” Brauchler said.Douglas County Sheriff Tony Spurlock said an investigation into Tuesday’s shooting is underway and law enforcement officials are still trying to determine a motive.The two suspects – an adult and a juvenile, both of whom attended the school – were apprehended by responding officers in two different parts of the school. The adult, who was identified by officials as Devon Erickson, 18, is set to have an advisory hearing Wednesday afternoon. The juvenile suspect has not been publicly identified.Spurlock said that three of the wounded remain in intensive care but the other five students have all been released from local hospitals. All of the injuries – as well as the fatality – were the result of gunshots.Few details about how the shooting unfolded have been made public. But Spurlock did say that the suspects entered the school, which does not have metal detectors, in the middle school section. There was an armed security guard at the school, but after police were notified of a shooting, officers on street patrol were at the scene in less than two minutes.”Once at the school, they immediately engaged the suspects and started to rescue the children that were injured,” Spurlock said, clarifying that shots were not exchanged between the officers and the suspects.Spurlock said that two pistols were used in the shooting. The state’s red-flag laws, which help prevent certain individuals from buying guns, would not have applied in this case because “neither one of them is of legal age to purchase a gun anyway.”Gov. Jared Polis asked for the community to come together and support one another, saying, “We’ve been no stranger to tragedy.””We are a resilient state, whether it’s in the face of fire floods or human tragedy like this,” Polis said. “America has seen too many of these senseless acts of violence.”