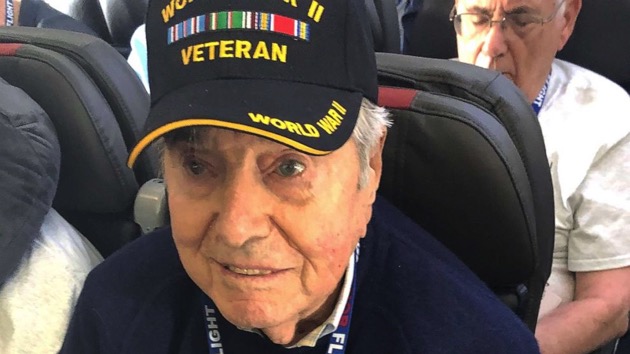 (SAN DIEGO) — A 95-year-old World War II veteran died during a flight to San Diego on Monday evening, returning from an “Honor Flight” to Washington, D.C., to vist the WW II Memorial, the organization arranging the trip confirmed.Frank Manchel was completing a trip arranged by Honor Flight San Diego – a group that provides veterans with all-expense-paid trips to visit war memorials in the nation’s capital.”It is with our most deepest sympathy that we send our condolences to the Frank Manchel family,” Honor Flight San Diego said in a statement on its Facebook page. “Mr. Manchel passed away on the flight to San Diego last evening. He collapsed and resuscitation measures were taken but he could not be revived.”Manchel, who served in the Army during WWII, was accompanied by his son during the trip. His brother, nephew, and second son joined him in Washington for the festivities.“Frank Manchel was so excited to go on Honor Flight,” Bruce Manchel, the family’s spokesperson and one of Manchel’s sons, told Honor Flight San Diego. “To be with both of his sons as well as his 93-year-old brother who met him in Washington, D.C., was so special. My father’s passing was the ending to the most amazing weekend, surrounded by his newest best friends.”According to Honor Flight San Diego, after Manchel passed away during the flight, his body was draped in the American flag that the group had carried with them to Washington while two chaplains on board prayed for him.Shelly Zimmerman, a retired San Diego police chief who was on the flight, ensured the group followed protocol once the flight landed in San Diego with medical personnel, firefighters, and law enforcement saluting Manchel as paramedics escorted his body to the tarmac.American Airlines, which flew the honor cordon from Washington, has offered to fly Manchel to his final resting place in Michigan, along with his family members, at no cost, Honor Flight said.”We thank all of you – Honor Flight San Diego, American Airlines, San Diego International airport, friends, and supporters for your concern and for allowing the weekend to be so special for all of us to share together,” Bruce Manchel said. “Frank passed quickly and peacefully and the compassion and respect that that was shown to our family will be treasured always. May he rest in peace as he is now with his other beloved son Jimmy.”Copyright © 2019, ABC Radio. All rights reserved.