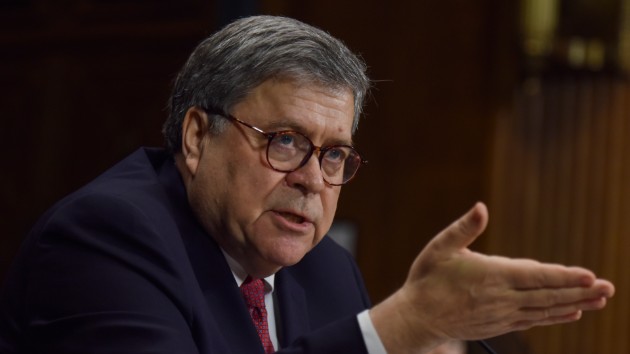 Jahi Chikwendiu/The Washington Post via Getty Images
Posted on May 7, 2019 by ABC News

(WASHINGTON) — Attorney General William Barr still believes special counsel Robert Mueller should be allowed to testify before Congress, despite President Donald Trump’s apparent objection, according to a source familiar with the attorney general’s thinking. As the head of the Justice Department and Mueller’s boss, Barr could attempt to block the testimony if he chooses.The president’s tweet over the weekend raised questions about whether he was instructing Barr to stop the special counsel’s requested testimony from happening.”Bob Mueller should not testify. No redos for the Dems!,” the president tweeted in part on Sunday. So far there are no indications that any such order has been delivered to Barr from the White House and the source says Barr has not changed his position.”I’ve already said publicly I have no objection to him testifying,” Barr said last week before the Senate Judiciary Committee.The DOJ did not respond to a request for comment. The White House also did not immediately respond.Democrats on the House Judiciary Committee announced on Monday they will move forward with plans to hold Barr in contempt of Congress for refusing to produce the full, unredacted special counsel report. The committee is scheduled to meet on Wednesday morning to advance the contempt citation. Committee members will hold a markup on the report where they’ll debate and vote on the resolution and a supporting report. Copyright © 2019, ABC Radio. All rights reserved.

Horn helmet-wearing, painted face Capitol rioter should remain in custody: DOJ
Liam Neeson reveals his plans to retire from action films
‘Cobra Kai’ star Martin Kove had to be “persuaded” to join the ‘Karate Kid’ reboot
PepsiCo announces plan to reduce emissions more than 40% by 2030
Yelp to display user-generated COVID-19 safety reviews for restaurants
Pelosi declines to say when she will send impeachment article to Senate