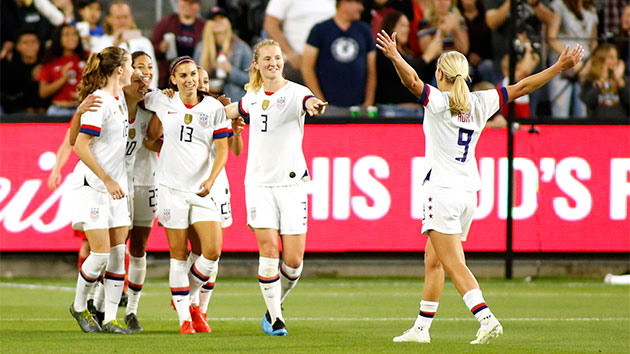 Katharine Lotze/Getty Images
Posted on May 7, 2019 by ABC News

(NEW YORK) — The U.S. Soccer Federation (USSF) is denying allegations of gender discrimination after the women’s national soccer team claimed unfair treatment in a lawsuit.”U.S. Soccer’s challenged pay practices are not based on sex,” according to a response from USSF filed Tuesday in federal court. Rather, “any alleged pay differential” is due to “differences in the aggregate revenue generated by the different teams” and other factors, the response said.The U.S. Women’s National Team (USWNT) suit alleged female players were treated unfairly on the field and in pay versus the U.S. Men’s National Team (USMNT), which is less successful in competition.The USSF, which also rejected the suit’s call for class action status, attributed the differences in treatment, including why women flew commercial while men traveled on chartered planes, to differences between the teams.”The USWNT and USMNT play at different times, in different locations, against different opponents, and are comprised of athletes who have different obligations, are compensated in fundamentally different ways, and enjoy different benefits; thus, USWNT players have no male ‘counterparts’ who play for the USMNT,” the response said.A spokesperson for the suing USWNT athletes told ABC News in a statement, “There is no legal basis for USSF’s claim that it is anything other than a single employer operating both the men’s and women’s teams — who face drastically unequal conditions and pay under their shared employer.”The USSF claims the players on each team “receive fundamentally different pay structures for performing different work under their separate collective bargaining agreements.”The men fall under a “pay-for-play” structure and are “only paid for individual match appearances” on tournament or tournament-qualifying rosters, the organization said, arguing male players’ compensation cannot be compared to the women “who earn guaranteed salaries and benefits.”The USWNT “consistently rejected all proposals” for a pay-for-play structure, USSF said.The players’ statement said in response, “The USSF cannot justify its violation of the Equal Pay Act and Title VII by pointing to the teams’ separate collective bargaining agreements or any factor other than sex.”USSF added that the “total prize money available” in the 2018 Men’s World Cup was $38 million compared to the $2 million for the last Women’s World Cup, which took place in 2015.The USSF also said the women’s team makes less revenue from game ticket sales, although it noted that it “invested in marketing and promoting the USWNT.”The organization did, however, admit “the 2015 FIFA Women’s World Cup final match broke the record for being the most watched soccer match shown on English-language television in this country” and “that the USWNT’s 2015 Victory Tour drew tens of thousands of fans to stadiums across the United States.”The women will have a chance to beat that record at the next Women’s World Cup in early June. “Even as the most decorated American soccer team in history, USSF treats the women’s team as ‘less-than’ equal compared to their male colleagues,” the USWNT statement said. “We look forward to a trial next year after the World Cup.”The men’s team did not qualify for the last World Cup.Copyright © 2019, ABC Radio. All rights reserved.