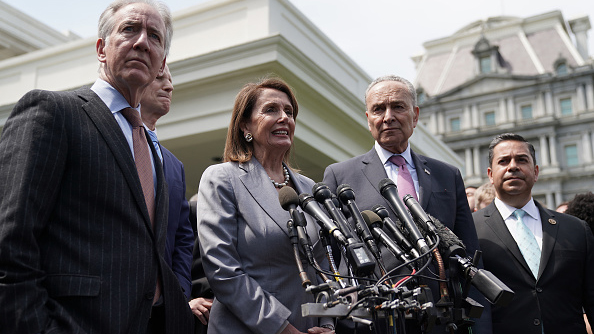 Chip Somodevilla/Getty Images
Posted on May 7, 2019 by ABC News

(WASHINGTON) — House Speaker Nancy Pelosi said on Tuesday that President Donald Trump is “trying to goad” Democrats into impeaching him “to solidify his base” ahead of the 2020 presidential election.”Trump is goading us to impeach him. That’s what he’s doing, every single day, he’s just like taunting taunting, because he knows that it would be very divisive in the country,” Pelosi said at an event at Cornell University’s Institute of Politics and Global Affairs in New York City. “But he doesn’t really care, he just wants to solidify his base.”We cannot accept a second term for Donald Trump if we are going to be faithful to our democracy and to the Constitution of the United States. And that is just a fact,” she said to applause. “So we have to operate on many fronts. We have to operate in the Congress, in the courts, and in the court of public opinion, and we must win the next election.”Pelosi, who has publicly and privately that Trump isn’t “worth it,” has cautioned liberal members and constituents calling for Trump’s impeachment in the wake of the Mueller report. She has urged Democrats to double down on their investigations into the administration and the actions outlined in the special counsel’s findings.The California Democrat hammered the administration’s stonewalling of Congress, and accused the president of obstruction, as Democrats continue to battle with the White House over access to documents, witnesses and information. “Everyday, Trump is obstructing justice by saying this one shouldn’t testify, that one shouldn’t testify and the rest,” she said. “He’s making a case — he’s just trying to goad us into impeachment and wherever you go. I say to my colleagues, wherever it is, be ready. And whatever it is, we’ll be ready. We owe that as a precedent for the future,” she said.Pelosi noted that the third article of impeachment drawn up against President Richard Nixon was for his failure to comply with congressional subpoenas regarding Watergate.”What’s different now from then is that the Republicans are just probably never, never going to vote for impeachment of this president,” Pelosi added. “But we’ll see as the facts become clear.””We can’t impeach him for political reasons, and we can’t not impeach him for political reasons,” she said. Pelosi did not provide a timeline for any decision, only saying Democrats would “weigh it” as they continue working.”One thing leads to another, one hearing leads to another where they don’t tell the truth, more things, and that might take us to a place but we have to have, I believe we have to have more information,” she said.Democrats are preparing to hold Attorney General Bill Barr in contempt of Congress as early as Wednesday for failing to comply with a subpoena for access to the full Mueller report, and grappling with the White House over documents and testimony from former White House counsel Don McGahn. Separately, the Treasury Department has rejected Democrats’ request for six years’ of the president’s tax returns, setting up another fight that will wind up in the courts.”It’s hard to tell what the courts will do, especially since he’s just appointed two justices to the Supreme Court who share some of his views,” Pelosi said.

Officer who fended off Capitol mob escorts Kamala Harris to inauguration
Trump issues last-minute pardon to ex-husband of Fox News’ Jeanine Pirro
Amazon tells President Biden it ‘stands ready to assist’ his ambitious vaccine goals
“Come with me if you want to live” — Arnold Schwarzenegger gets COVID-19 vaccine
Former ‘That ’70s Show’ star Danny Masterson pleads not guilty to rape charges
“This isn’t going to be quiet”: Daniel Kaluuya recalls when ‘Black Panther’ went from being a movie to a “moment”