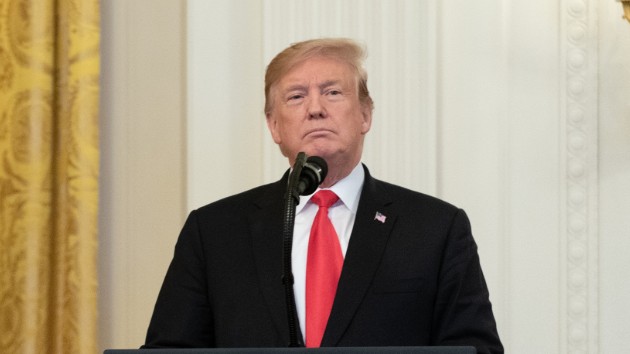 Official White House Photo by Shealah Craighead
Posted on May 7, 2019 by ABC News

(WASHINGTON) — President Donald Trump has pardoned Michael Behenna, a former Army Ranger in the 101st Airborne Division convicted of murdering an Iraqi prisoner in 2009. Behenna, 35, was sentenced to 25 years in prison for “unpremeditated murder in a combat zone” after killing suspected al-Qaeda terrorist Ali Mansur. Behenna was paroled in 2014.While Behenna said he killed Mansur in self-defense, during the trial he admitted that he disobeyed orders to return Mansour to his village after he was released from military intelligence and questioned about his connection to an explosion that killed two U.S. soldiers.Prosecutors said Behenna instead interrogated and stripped Mansour naked before shooting him twice.Behenna’s trial raised the support of fellow soldiers.White House press secretary Sarah Sanders wrote in a statement that upon his release from jail in 2014, “Dozens of Patriot Guard motorcycle riders met Mr. Behenna to escort him back to his home in Oklahoma.” She added that “Behenna’s case has attracted broad support from the military, Oklahoma elected officials, and the public” and he was a “model prisoner.”But questions have been raised about Behenna’s claim of self-defense.Oklahoma Attorney General Mike sent a letter to Attorney General William Barr earlier this year urging the Trump administration to consider a pardon for Behenna.In a statement, Behenna thanked the president “for his act of mercy.””Although this is a time of great joy for my family, we as a country must never forget Adam Kohlhaas and Steven Christofferson and all those who gave their lives in service of this great nation,” Behenna said, referring to his comrades killed during combat. “They represent the finest of our society, and their families will forever be in our thoughts and prayers.” Copyright © 2019, ABC Radio. All rights reserved.