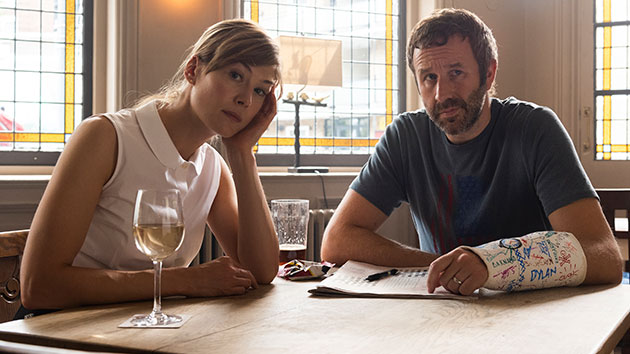 (NEW YORK) — Writer Nick Hornby, author of High Fidelity and About a Boy and the Oscar-nominated screenwriter of An Education and Brooklyn, is venturing into American television for the first time with State of the Union. The show, which premiered Monday on SundanceTV, tells the story of two characters, played by Gone Girl’s Rosamund Pike and Bridesmaids’ Chris O’Dowd, who are going through marriage counseling.

What makes the show unique is that each of its 10 episodes is only 10 minutes long, and focuses on the 10 minutes before Pike and O’Dowd’s characters enter their weekly session. Hornby feels those 10 minutes before counseling are where “the good stuff happens.”

“Going into counseling is relatively dramatically inert, because people try and answer straight questions,” he tells ABC Radio. “Whereas what happens before is a muddle of what happened last week and what might happen this week.”

Both Pike and O’Dowd had roles in movies based on Hornby’s books: A Long Way Down and Juliet, Naked, respectively. Hornby felt that the were right for State of the Union due their ability to “go from funny to serious and funny to sad [very quickly].”

“Not all actors can do that,” Hornby says. “I think they’re great at that.”

At first, Hornby was concerned that he’d feel constrained about the 10-minute format, but soon found it liberating.

“If you can write a 10-minute conversation and not have to cut it and you can go anywhere it wants to go, no one’s gonna let you do that in a movie,” Hornby explains. “So, paradoxically, it gave great freedom to do that stuff.”

State of the Union airs every weeknight until May 17 at 10 p.m. ET on SundanceTV. You can also watch two episodes at a time via SundanceTV.com.