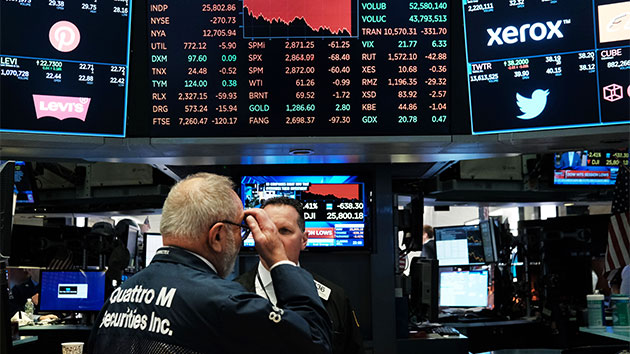 Spencer Platt/Getty Images
Posted on May 7, 2019 by ABC News

(NEW YORK) — President Donald Trump, who has called himself “Tariff Man,” took investors by surprise when he escalated a trade war with China in announcing steep new tariffs on Chinese goods. In response to concerns about a potential trade war, the Dow on Tuesday had its biggest drop since early January, and falling 473.39 points or 1.79% at closing.The dramatic sell-off in the markets came after Trump’s top trade negotiators confirmed that, effective on Friday, tariffs on $200 billion in Chinese goods will increase from 10% to 25%. The president initially announced the move in a tweet on Sunday, and blamed his decision on trade talks that he said were moving “too slowly.” It was a dramatic shift in tone after the president had said just days before that negotiations were moving along well.

….of additional goods sent to us by China remain untaxed, but will be shortly, at a rate of 25%. The Tariffs paid to the USA have had little impact on product cost, mostly borne by China. The Trade Deal with China continues, but too slowly, as they attempt to renegotiate. No!

For months, the United States and China have been involved in high-stakes negotiations for a trade deal after Trump and Chinese President Xi Jinping agreed to halt a tariffs tit-for-tat that roiled global markets. Last week, Treasury Secretary Steven Mnuchin and U.S. Trade Representative Robert Lighthizer traveled to Beijing, China for trade talks they characterized as “productive.” But then, it seems, things took a turn for the worse.In a briefing with reporters on Monday, Lighthizer said China was “reneging” on trade commitments. The president, a senior administration official said, had been willing to hold off on tariffs but when he heard discussions were heading in the wrong direction and that the Chinese were renegotiating certain commitments, decided to tweet about tariffs on Sunday.Previously scheduled trade negotiations with China were still on track to happen in Washington this week. China’s Commerce Ministry confirmed that Chinese Vice Premier Liu He, China’s top negotiator, will join a delegation for continued negotiations on Thursday and Friday in Washington. Initially, a 100-person team from China was expected to travel to the nation’s capital on Wednesday, but the Chinese were shaken by Trump’s tweets and the talks were delayed by a day.Investors around the world remain spooked and have not expressed confidence that a trade deal between the world’s two largest economies could actually be reached.The impact of the increased tariffs will be felt most acutely by U.S. consumers and businesses. Tariffs are taxes paid by importers at the border, and those costs are typically absorbed by consumers and businesses buying the imported goods.”A sudden tariff increase — with less than a week’s notice — would severely disrupt U.S. businesses, especially small companies that have limited resources to mitigate the impact. If the administration follows through on this threat, American consumers will face higher prices and U.S. jobs will be lost,” said the National Retail Federation’s David French. “We want to see meaningful changes in China’s trade practices, but it makes no sense to punish Americans as a negotiating tactic. If the administration wants to put more pressure on China, it should form a multinational coalition with our allies who share our concerns. We urge the administration to reconsider this tax hike on Americans and stay at the bargaining table until a deal is reached.”Mark Zandi, chief economist of Moody’s Analytics told ABC News that “so far consumers have been pretty immunized from higher tariffs because they’ve been largely on business goods (equipment, etc).”But he added, a 25% tariff on $200 billion “is fodder for a potential recession.”Diane Swonk, economist at Grant Thornton, told ABC News that a renewed trade war with China would “wreak havoc” on the global economy.”The current threats to increase and expand tariffs on Chinese goods is particularly worrisome as consumers would be hardest hit,” Swonk said.The president has had some unusual support on Capitol Hill for his tough stance on China. On Twitter, Senate Minority Leader Chuck Schumer, D-N.Y., urged Trump to “hang tough on China,” and “don’t back down. Strength is the only way to win with China.”Despite the uncertainty swirling around the upcoming trade negotiations, a senior administration official stressed that if the Chinese want to return to what they had already agreed to, a deal could still be made.