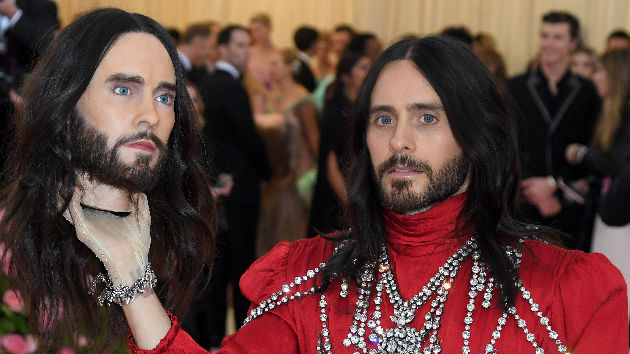 Photo by Karwai Tang/Getty Images
Posted on May 7, 2019 by ABC News

The Suicide Squad actor and musician arrived at the celebration wearing a red, jewel-encrusted Gucci outfit, which he accessorized with a replica of his own disembodied head.

The theme of this year’s Gala, held at New York City’s Metropolitan Museum of Art, was Camp: Notes on Fashion, inspired by author and philosopher Susan Sontag’s seminal 1964 essay Notes on Camp. Speaking to Vogue, Leto described how his outfit reflected the theme as “celebrating things that maybe are discarded.”

“It’s not taking life or fashion too serious,” he added. Or as another version of his Joker alter-ego has said, “Why so serious?”

Perhaps we’ll see more severed Leto heads on the upcoming European tour of his band Thirty Seconds to Mars; it launches the end of June.