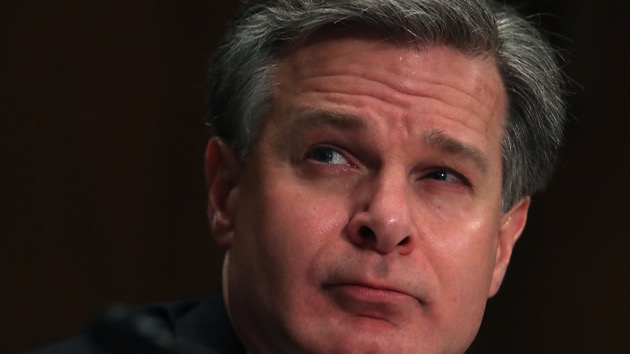 Mark Wilson/Getty Images
Posted on May 7, 2019 by ABC News

(WASHINGTON) — In testimony before members of the Senate on Tuesday, FBI Director Chris Wray appeared to split with Attorney General Bill Barr, telling lawmakers he would not use the term “spying” to describe his bureau’s investigative practices.”That’s not a term I would use,” Wray said in an appearance before the Senate Appropriations Committee.Barr told lawmakers during an appearance before Congress last month that he believed “spying did occur” on the Trump campaign during the 2016 election, sparking criticism from some former members of the intelligence community and law enforcement.Barr defended his use of the term before the Senate just last week, saying he didn’t intend to use the word as “pejorative” as his department continues its investigation into whether any surveillance on members of the Trump campaign was proper.President Trump had celebrated Barr’s testimony as vindication of his long-disputed claims that the Obama administration was illegally spying on members of his campaign in order to undermine his run for the presidency.Republicans have in turn used the comments as fuel to their calls for an “investigation of the investigators,” which Democrats have argued is merely an attempt to distract at some of the more damning revelations that surfaced in Mueller’s more than 400-page report.Wray said he has so far seen no evidence of any improper surveillance on any of the 2016 presidential campaigns, but said his bureau continues to cooperate with an ongoing inspector general investigation into that very question.”I mean, look, lots of people have different colloquial phrases,” Wray said. “I believe that the FBI’s engaged in investigative activity and part of investigative activity includes surveillance activity of different shapes and sizes and to me, the key question is making sure it’s done by the book, consistent with lawful authorities.”Wray was also pressed by lawmakers on his reaction to the release of the special counsel Rober Mueller’s report and his bureau’s work to prevent any future Russian meddling in America’s elections.One Republican committee member specifically inquired whether any other countries are meddling in U.S. elections in a similar fashion to the 2016 Russian effort.”The specific form of sowing divisiveness and discord through the bullhorn that social media provides, that is something that is really unique to the Russians,” Wray said.Copyright © 2019, ABC Radio. All rights reserved.