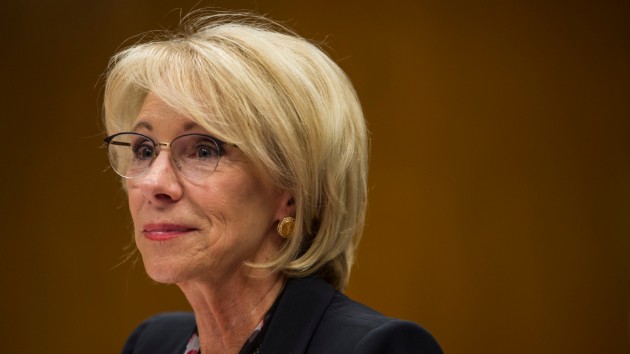 Zach Gibson/Getty Images
Posted on May 7, 2019 by ABC News

(BALTIMORE) — Education Secretary Betsy DeVos wouldn’t commit to another four years as head of the agency when asked if she would serve if President Donald Trump were to win another term. “I’m not sure my husband would be okay with that,” DeVos said during a Q&A at the Education Writers Association conference in Baltimore on Monday. DeVos is one of the longest-serving members of Trump’s cabinet — one of the few cabinet secretaries to survive the administration since Trump’s 2016 election. But the president has taken little interest in education policy and has focused on immigration instead.The result has been little traction on her plan to encourage “school choice,” her signature issue. Last February, DeVos pitched a federal tax credit for scholarships that would enable students to pay for private and home schools, apprenticeships and other programs.Conservative groups have spoken out against the plan because they say it would complicate the tax code. And Democrats call it a nonstarter because they claim it would shrink the tax base needed to fund public schools.During her speech on Monday, DeVos also blasted reporters for using her name as “clickbait.”“I never imagined I’d be a focus of your coverage,” she told reporters.“I don’t enjoy the publicity that comes with my position,” DeVos added. “I don’t love being up on stage or on any kind of platform. I’m an introvert.”“As much as many in the media use my name as clickbait or try to make it all about me, it’s not,” she said. “Education is not about Betsy DeVos nor any other individual.”Another buzzy moment during the session happened when DeVos took aim at the head of the American Federation of Teachers union.DeVos said she felt walking out of classrooms too often hurts students.“We think, I think, teaching as a profession should be a highly honored and respected profession and I think it’s been de-professionalized in many ways,” she said. “And I think great teachers … perhaps should be making at least half as much as what Randi Weingarten does at half a million dollars a year.” Copyright © 2019, ABC Radio. All rights reserved.