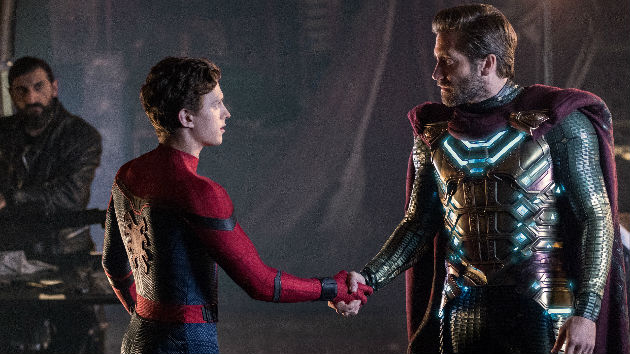 (HOLLYWOOD) — (ENDGAME SPOILERS AHEAD) The Avengers: Endgame spoiler ban is officially lifted today, just in time for the new Spider-Man: Far From Home trailer to be released. But if you still haven’t seen Endgame, stop reading now – and definitely don’t watch the trailer.

In the clip, Peter Parker is still dealing with the aftermath of the major Thanos battle that occurred in Endgame, during which his mentor Tony Stark – aka Iron Man – heroically sacrificed his life to save them all.

“Everywhere I go, I see his face,” Tom Holland’s Parker says of Stark. “I just really miss him.”

“I don’t think Tony would have done what he did if he didn’t know that you were going to be here after he was gone,” Jon Favreau’s Happy Hogan tells Parker.

The film follows Peter as he takes a break from being Spider-Man to go with his class on a trip to Europe. While there, Samuel L. Jackson’s Nick Fury tracks him down and introduces him to Jake Gyllenhaal’s Mysterio who, Fury, explains, is “from Earth, just not ours.”

According to Fury, the Thanos-defeating snap in Endgame “tore a whole in our dimension” and has opened up a “multiverse.”