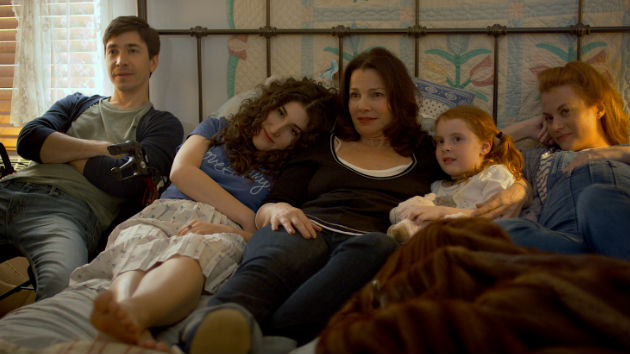 Photo courtesy of AMBI Media Group
Posted on May 6, 2019 by ABC News

In the film, Long plays Josh, a New York City college professor facing accusations of controversial behavior in the classroom, while dealing with his dysfunctional but tight-knit family. Drescher and Schiff play the divorced parents of Josh and his adult siblings.

“The both of them, I felt an almost immediate closeness, just ’cause I liked them so much as people and they’re so easy to be around,” he said.

Then, addressing his two co-stars, he added, “It would have been a struggle I think if you guys had been kind of guarded and difficult.”

Schiff agreed, and said Drescher immediately put them all at ease.

“Fran has this way of [making you feel] like you’ve known her all your life, partly because you’ve seen her all your life,” he said of The Nanny star. “But she just has a way of being extraordinarily boundary-breaking immediately.”

As for what excited her about the role, Drescher joked, “Well I guess I was just dying to play a grandma! Never did that before! I thought, ‘Oh, wow, what an opportunity here.”

The 18th annual Tribeca Film Festival came to a close this weekend.