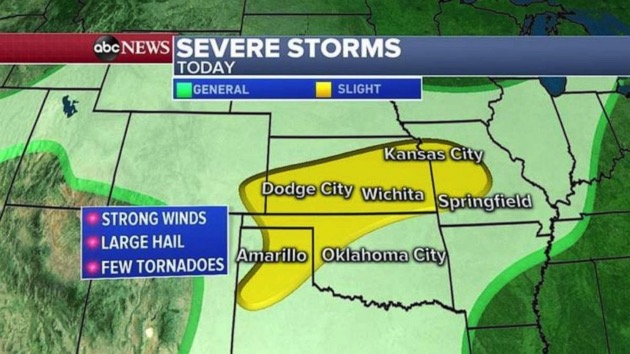 (NEW YORK) — At least 20 tornadoes have been reported over the last 24 hours from Texas to Nebraska as more severe weather targets the central U.S.The Plains and Midwest are bracing for a storm outbreak this week that’s likely to include damaging wind, hail and tornadoes. Flash flooding also remains a significant threat.Yet another system is heading from the Rockies into the Plains by midweek, with greater tornado risks possibly seen as early as Tuesday.Throughout the next few days, this outbreak of severe weather is expected to deliver massive amounts of rainfall from Texas all the way up into the Great Lakes and Ohio Valley regions, which could see more flash flooding as well — especially toward the end of the week.Copyright © 2019, ABC Radio. All rights reserved.

National Rifle Association files for Chapter 11 bankruptcy
Two US COVID variants have been identified. What does that mean for vaccines?
Yelp to display user-generated COVID-19 safety reviews for restaurants
Trump-Biden transition live updates: Biden announces pick for FEMA chief
Real-life ‘League of Their Own’ player raises money for 94th birthday to build women’s baseball center
DC police officers speak out after US Capitol siege: ‘I thought … I might die’